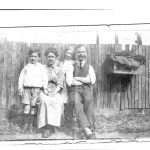 Casual photographs from ninety years ago are not plentiful. The cost of a camera combined with the cost of developing and printing film meant photographs were for the affluent or the enthusiast. Family photographs tend to be of two types, either studio portraits of people dressed in their Sunday-best outfits or wedding photographs, marriages seeming to have quickly become occasions dominated by picture takers. Ordinary snaps, pictures of everyday moments seem special because of their comparative rarity.

Given the scarceness of the ordinary pictures, everyday photographs of his own grandfather sent to me by my father came as a delight. A friend or a neighbour must have possessed a camera and been happy to take commonplace pictures.

A family group is pictured against the background of a garden fence, a rabbit hutch is fixed to the slats of the fence. There is no attempt to make the occasion formal. My great uncle stands looking pensive, his left hand held by my great grandmother. My grandmother peers from behind the shoulders of my great grandparents. My great grandfather has his pipe in his mouth, he looks content with a half smile and rolled shirtsleeves.

The photograph cannot date from later than the early 1920s; my grandmother was born in 1909 and looks no more than twelve or thirteen years old. What occasioned the photograph? Had the friend newly acquired the camera?Natural light was required; flash photography was expensive and required professional equipment. There is an air of the impromptu about the picture, and an air of inexperience. If the photograph had been planned, the dress might have been different, the sleeves rolled down, the pipe put away, and would an experienced photographer have included the rabbit hutch?

The moment captured must be at least ninety years ago, no-one is left who might tell its story. It is a heart warming photograph. In October 1917, my great grandfather was serving with the Sixth Battalion of the Somerset Light Infantry in Flanders and sustained gunshot wounds to his face, abdomen and thigh; wounds so severe that he was taken back to successive military hospitals and was never able to serve again in the front line. In the photograph he seems healthy and happy, he seems to reassure those who would follow him that all was well..

If there were just a few notes, even a date or an address, they would add so much to the picture, but even now, in times when the number of pictures taken has increased perhaps a thousandfold, who adds notes to their pictures?