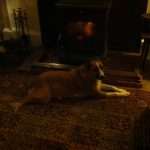 Papers arrive for a meeting. “Please talk to me about this beforehand”, is handwritten across the bottom of the covering letter, “otherwise we are going to make no progress”. Humph. There seems little point in like-minded people meeting beforehand, especially when all has been said at the previous meeting.

The television talks to itself, inane chatter interspersed with advertisements for detergents and furniture. Why it was switched on is a mystery, no-one is watching the programme. The five remote controllers ask the riddle of which of them will rid the room of the D4 voice. How did we come to have so many controllers? In days in England, our black and white television was turned on by pressing a button and turning a numbered selector to change channels – No 7 was Harlech, No 9 was Westward, No 11 Westward, and between No 1 and No 6, there must have been the two BBC channels. There was no point in turning it on for most of the day, there was only the test card. (Does anyone know anyone who actually used the test card to tune in their television?)

For once, pressing the right button on the right controller brings silence to the room. Even in the quietness, the business of the meeting looks no more amenable to easy solution. The deepest problem is in knowing why people think the way they do. Asking such a question brings only blank looks, as if someone who really understood would already know the answer and would not need to ask.

In the quietness, there is space to think. Opening the front of the stove, a fresh log brings renewed life to the fire: it glows a deep orange behind the thick glass. Of course, the stove is far more efficient, but it burns without the diversity of an open hearth, the shape and colour of the flames is lost. The images and stories one could once see are no longer there.

A showing of the Northern Lights is forecast for tonight. It is ten years since we last saw them, and then it was in the Dordogne; greens and yellows across a cold French Toussaint sky. It is said that the Aurora can bring with it strange sounds in the night air, as if applauding itself for the display.

The dogs suddenly stir from their hearthside slumbers and begin to bark. There are forty-two stairs from the warmth of the room down to the chill of the basement to let them out: no colours yet in the sky.

Maybe the question at the meeting needs a Shavian response, “You might ask, ‘why?’ We ask, ‘why not?’ Of course, it won’t win the argument; defer it, perhaps, for a while.

One can only listen to so much silence. John Creedon’s programme is on the wireless (a real wireless, even older than the television with its numbered channels from childhood days).