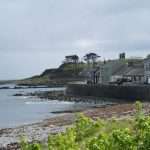 It is twenty years now since the book was published, a book that prompted thoughts about Saint Paul’s words, “A man reaps what he sows”.

C was private and prickly. Her little cottage had the claustrophobic air one would expect of a a place of barely more than four hundred square feet filled with the furniture of a house half a dozen times bigger. Darkly moody dressers would be inaccessible because of the chairs that stood in front of them. Each piece was a family heirloom, but for whom? C was the end of the family line; her brother, her only sibling, had died fighting for the British army in some pointless war in some faraway place, and C had spent years afterwards researching every aspect of the history of his regiment.

I was fond of C. She was a gentle soul, respected, at a distance, by her neighbours. However, C had another, darker, side to her. Undemonstrative in her religion, fond of the Book of Common Prayer and old hymns, C seemed a classic, traditional Anglican. One of the few in the village to buy the Daily Telegraph, C seemed to fit well the traditional caricature of that newspaper’s readers. Conservative in values, careful in her stewardship of money, respectful of authority, wary of change: C seemed the sort who would have been at home living on a village green in the English shires. The darker side only emerged when one tried to talk about the Troubles, or sectarianism, or community relations, or, a word she despised, ecumenism.

C was vehement in her Protestant identity and bitter in her dislike of the Roman Catholic church. The grounds for her dislike were unclear, her family appeared to have prospered all through the years of Protestant dominance; C in retirement had considerably more money than most people I knew. Her family had not suffered during the Troubles and though she lived in a village where it was unsafe for security force members, she had never once had a word said to her.

The bitterness did not manifest itself until a conversation about a man who had once lived in the village; his father had been rector. C spoke of the onetime incumbent of the parish with vitriol.

“He had strange ideas. He thought we should have a closer relationship with the Roman Catholics. We put pay to that”.

Indeed they had, the late rector’s son had told me so, and I had not believed him. “They drove my father into his grave”, he had said.

The rows surrounding an attempt at ecumenism at the beginning of the 1960s had led to the breakdown of the rector’s health and his death from a heart attack.

In 1994, when I had known C for about five years, the only person from the community who had gone onto fame published his memoir of the village in the 1930s, it described life there in detail. The time of publication coincided with C being taken ill. The illness seemed fortuitous, the book referred to her family in less than glowing terms: “mean and good for nothing”, he had said of them. Visiting her some months later, I was aghast to see the book on her table. “Are you enjoying it?” I inquired.

“I wouldn’t worry”, I said, “nothing much happens. You would do better to read something lighter”.

There was annoyance at the writer, who had gone on to become a public figure. Had he picked up the phone book, he would have known there was still one of the family alive, still someone to offend. Did he deliberately include the reference to C’s family? Were his, quite credible, words a payback for past years? Or was it  a reaping by C of the pain her family had sown?

Sixty years had passed between the publication of the book and the events it described. Perhaps our memories are sometimes too long.