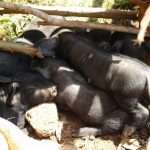 There seems an inclination to see corruption in only some places, to view some nations as naturally inclined to corrupt practices, whilst regarding others as above suspicion.

Attempting an electronic transfer of funds to Rwanda during the Christmas period proved to be unexpectedly difficult. A telephone message was left by a bank official in Dublin, would I call someone in the bank’s foreign exchange office. Calling the number brought an accusatory voice. “We notice you have tried to transfer money to an account in Rwanda; we need to know why you are sending this money”.

“It’s for an agriculturalist to buy livestock, but I don’t know why it’s any of you business”.

“There are trade sanctions in place against Rwanda and we have to be satisfied about every transaction”.

“Oh, it has been in place for some time now”.

“Well, why was there no question raised when I transferred money last May?”

“There would have been; it mustn’t have been the same account”.

“Of course it was the same account, you can see for yourself, if you look at the payment log”.

“Well, the transaction went through online without anyone asking any questions. I am not sure why you have picked on Rwanda; you should check the Transparency International website, they have a league table of corruption and Rwanda comes through as a place far more honest than European countries like Greece and Bulgaria.”

The caller expressed polite interest, the way officials do when you know they have paid no attention.

Reading Bill Bryson’s “One Summer America 1927” confirmed my impression that corruption is seen only in some places. American history as taught in England told of inter-war period that saw a period of post-war growth followed by the Crash of 1929 and the Great Depression. If corruption appeared, it was connected with the evasion of Prohibition laws, or the gangsterism of people like Al Capone, or local politicians who used power to benefit themselves, family and friends. Nowhere in the teaching of that history was there a suggestion that corruption attached to the highest office of state.

Bryson writes of the presidency of Warren G. Harding,

Harding’s administration was the most breezily slack in modern times. Although he made a few irreproachable appointments . . . for many posts he selected people he simply liked without considering whether they were qualified or not. His choice for head of the Federal Reserve was Daniel R. Crissinger, a friend and neighbour from Marion, Ohio, whose previous highest professional achievement was to be director of the Marion Steam Shovel Company. For chief military adviser, Harding chose Ora Baldinger, who had formerly been family newsboy. Harding gave his sister a senior position in the US Public Health Service and made her husband superintendent of federal prisons, previously the couple had been Seventh Day Adventist missionaries in Burma.

The most extraordinary appointee of all was Charles Forbes, whom Harding had befriended on a trip to Hawaii and about whom he knew almost nothing. Appointed to the role of head of the Veterans’ Bureau, Forbes managed in two years to lose, steal or misappropriate $200 million . . .

. . . The total cost to the country of all the various acts of incompetence and malfeasance has been put at $2 billion – a sum that goes some way beyond stupendous.

In the years that followed the 1920s, it would have been absurd to have judged the United States on the basis of the conduct of a small elite. It’s just as absurd to judge the entire people of an African nation because of suspicions attached to a small number.