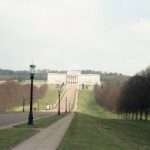 Watching Eamon Mallie’s interviews with Ian Paisley, there were moments when it seemed hard to reconcile the avuncular figure sat in an armchair in the study of his Belfast home with the bellowing preacher of former times.

We went to Martyrs’ Memorial Free Presbyterian Church – once. It was Sunday, 1st August 1982. The previous day’s edition of the Ulster Newsletter, the only daily newspaper then carrying advertisements from Paisley, had an announcement that there would be sermons marking the thirty-sixth anniversary of his ordination, which had taken place in 1946 when he was twenty.

Arriving half an hour early, we still had to sit in the gallery, the ground floor being full. Being there was an uncomfortable experience, and that was before the service had started. Dressed in collar and tie and corduroys and brown leather shoes, accompanied by my fiancee who was wearing a summer dress, we felt we looked sufficiently tidy for a summer’s evening. We were mistaken; the church was filled with men in dark suits and women wearing frocks and hats.

Paisley stepped into the pulpit at seven o’clock, and the service began. There was a rousing revivalist hymn to open proceedings, “There’s Power in the Blood” or something similar. Only a few lines had been sung when he stopped the singing, “Who here is singing as well as they could?” He paused. “Charlie Haughey hasn’t got us yet. The Pope hasn’t got us yet. Thank God for a Protestant Ulster”. The place was electrified; the singing of the 2,000 strong congregation doubled in volume.

The time came for the sermon. Titled, “Some dogs who have barked at me over the past thirty-six years”, it was a survey of his triumphs over every one who had opposed him. There were particular people whom Paisley characterized as “dogs” who had barked at him, the foremost of them being Brian Faulkner. Looking around he declared to his listeners what had happened, “I said that if Brian Faulkner died a natural death, then I wasn’t a man of God. I was away and I picked up a newspaper and read that Brian Faulkner had fallen from his horse and had died, outside the house of a Free Presbyterian”. The sermon lasted an hour and three minutes, the words about Faulkner reflecting its general tenor.

Leaving Belfast that evening, there was a sense of bewilderment and fear. Was this was what Christianity in Northern Ireland was really about? Was this what people really believed? Being an English liberal, it seemed hard to reconcile the Jesus of the Gospel story with the Jesus proclaimed by Paisley, but who was I to speak? His church was full and we had plenty of empty pews. When it came to elections, he topped the poll on each occasion and the Alliance Party, for whom I voted, came far behind.

The years passed and Paisley seemed to mellow; his party came in from the cold and enthusiastically took their seats in the new government. There seemed a real rapport between he and Martin McGuinness of Sinn Fein, something unimaginable in 1982. There came a point when it might have seemed difficult to imagine that he had ever said such things about people like Brian Faulkner, but he did and he repeated them on the Sunday after the Anglo-Irish Agreement, including Margaret Thatcher in his vitriolic denunciations, “I want to say something from this pulpit tonight. God never sent me as a preacher if this woman prospers. You will know that God never sent me. I want to tell you that this woman will not prosper. You mark her career and I tell you, before many days you will see what God will do to this lying woman, who has betrayed this Province”.

Watching him sitting and smiling at Eamon Mallie, there was no discernible sign of any regret for the divisions he had fomented; no sign of any contrition for having preached a political religion that simply disintegrated when politics changed; no movement from the assumption that he had always been right, and that if his own church and his own party had removed him, then they must be mistaken. This was a man who believed he could call death down upon the “dogs”, how could he have admitted being wrong?