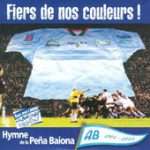 It only took just over two years to learn how to make a tune a ringtone on my iPhone – it includes technical things like changing a file’s suffix. Success in making the change was not welcomed. “Oh no”, groaned the Best Beloved, “not that tune”.

“That tune” was the occasion of a strange moment in 2008. Catching a four-man chair lift up a mountainside in Austria, I heard my phone ringing. I knew it was my phone because twelve days previously I had changed my ringtone of my old Nokia to a recording of Bayonne rugby supporters singing their club anthem “La Pena Baiona”. The odds against anyone else having a song by Basque rugby fans as their ringtone seemed fairly long, particularly in a valley where my ski instructor claimed to be the founding and only member of the Alpbach rugby club.

Pulling off my right glove with my teeth, I fumbled inside my jacket for my phone. It wasn’t ringing. I then realized that the music was coming from inside the lift operator’s hut. Very odd. Had I spoken any German, I would have asked the man about the playing of rugby songs.

The moment would have passed, if it were not for the fact that an hour later I passed a mountain restaurant where the same tune was playing. How could my instructor have trouble finding members of a team when the hills were alive with the sound of the Bayonnais?

Internet searches found the same tune being sung by Basques in the town of Dax both in the streets at the opening of the feria and by thousands gathered in the bullring last summer, except the song they sang was “Vino Griego.”

“Vino Griego” in south-west France, “Vinho Verde” in Portugal, “Phile Kerna Krassi” in Greece, the rugby song seemed to have travelled around a lot. Except, of course, it wasn’t a rugby song at all. The song sung with such gusto by the Basques seems to owe its origins to Udo Jurgens, the Austrian winner of the 1966 Eurovision Song Contest, who in 1975 sang “Griechischer Wein” (Greek Wine), a song which remains popular.

Ah well, it’s a good tune anyway, and it reminds me of both the special atmosphere at the Stade Jean Dauger in Bayonne, where everyone stand for its singing at the start of the match, and the breathtaking beauty of the Austrian Alps. Bayonne fans would put even Munster fans in the shade – and I doubt there is another ringtone like it.