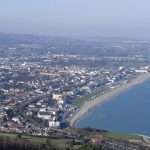 RTÉ ‘s “Play Next Door” has Deirdre Purcell in Bray, the seaside town in Co Wicklow. Bray was once my favourite place to be; a football match on a Friday night and a pint afterwards.

It is four years since I sat in a seafront pub in Bray on a Friday night, an excellent female duet sang old R & B songs for the couple of dozen customers who, for the most part, paid little attention. Unlike the produced, packaged and computerised stuff that now trades under the name of music, there was genuine talent and freshness. Sitting on a table watching them sing Bill Withers’ 1971 song, ‘Ain’t no sunshine’, there was the sudden realisation that I was meant to be catching the train back. “I must go back sometime and hear them again”, I thought. Of course, I didn’t. Bray is now a long way off.

Sitting, earlier in the evening, we had a daft conversation about the songs played at the end of discos.

“Did you have Frank Sinatra singing ‘New York, New York”?

Frank Sinatra? In a disco in Somerset? “No”, I said, “we had Jeff Beck singing, ‘Hi, ho, silver lining”.

Did we though? Were there to be an inquiry into songs being badly sung by people who had drunk too much, could I testify that Jeff Beck’s lyrics were sung on every occasion? Maybe we didn’t always sing Jeff Beck; maybe we sang him only once, and the moment became the mood felt at the end of every disco.

Maybe it was that Jeff Beck created a mood in which you escaped for a few minutes from the fact that the evening was over, and that very mundane life continued in the morning. Was it that we were all pretending to be jolly as the refrain was raucously shouted?

Perhaps ‘New York, New York’ played a similar role in rural Ireland. You couldn’t be much more removed from the Big Apple than a town in the Irish midlands, yet for a moment you could escape; forget about the boredom of everyday life.

Maybe ‘New York, New York’ was a more considered response to the reality of rural life than Jeff Beck, or maybe Irish teenagers of the 1970s were more cheerful than their English counterparts, able to imagine themselves in a different world, while we just sang loudly to blot out the things that annoyed us.

None of it mattered. We had both moved far from our respective worlds to be able to be sat in Bray on that a spring night, but there are moments when one could write an entire autobiography in a series of songs; at least one that ran to the point where listening departed from the present to retreat into the world of nostalgia.

Maybe it would be possible to pick a playlist to express the moods of a life. Maybe that was what prompted sitting on the table to listen on Friday night, while everyone else talked. ‘Ain’t no sunshine’ would have its place in those years of teenage angst. Perhaps there is a tune to capture that evening in Bray.