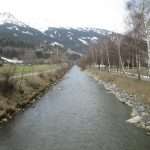 The wind turned in the Alpine valley on Thursday evening, the cold, dry and frosty air was replaced by warm and damp air from the south. By this morning, as the temperature rose from below freezing to fourteen degrees, the scenery seemed closer to Dartmoor in early spring than Austria in winter.

Suffering asthma severe enough to be dispatched to the pure air of Dartmoor, there were days on the moor when the outside world could have ceased to exist, the snow was so deep, then it would clear to reveal the brown greenness of the growth beneath.  The school lay in a fold in the hills, unreachable without crossing open moorland in some direction.  Yet the spartan regime of the fundamentalist education could detract nothing from the beauty of the place; there was a magical quality in the valleys and the tors and the placenames.

Sally Vickers’ Mr Golightly’s Holiday captures a profound sense of the moor, with all its contradictions, its beauty and brutality, its earthiness and transcendence.  For Vickers, it is the stage on which to ask big questions; the casual sex, drinking and backbiting of the characters he meets are not sufficient to pull Mr Golightly completely from his thoughts or his encounters with the profound.  Mr Golightly goes to the moor in the spring.  He would have enjoyed the stark scenery of the winter, though would have recoiled at seeing corpses of animals that had not survived the short, dark days.

It is in this place of contradictions that Mr Golightly ponders the loss of his son, like himself, a storyteller:

In times past, when he had been quick to anger and quicker still to take vengeance, there was no doubt he commanded more respect. Nowadays, there was a tendency to treat him as a busted flush, a toothless tiger. The series of e-mails was a case in point: it looked as if he had become the ignominious butt of a taunter.

The annoying questions were goads, the latest seeming to point mockingly at the difficulty Mr Golightly felt himself labouring under. ‘Unicorns’ were the stuff of fiction – a medium in which he was stuck fast.

But the question provoked another: was a unicorn less ‘real’ for being fabulous? There were those – poets and artists – who had ‘bound’ the unicorn, rendering the imaginal creature as distinct and palpable as if they had seen and conversed with it. Some might say – his son had been one – that it was in the artefact of the ‘impossible’ that reality showed its true reach.

Looking outside he saw a spider’s web, one of many whose delicate dentations decked the cottage windows. The spider spun its web simply to trap flies – but what was designed by nature for a natural function may take on more than nature’s ends. The fragile structure had caught, in its subtle mesh, the drops of rain from a morning shower and the diamond beads shone in the sun, fragments of some larger, profounder, more luminous light, reflecting the mysterious power of creation to recreate, from its own forms, an infinite scintillation of possibilities; possibilities which gestured at realms far beyond the demands of immediate survival.

Why should that wholly practical, sticky emanation, devised by evolution to trap the food to fill the hungry spider’s belly, be able also to catch the human imagination and draw in the impressionable heart? The power of the universe to create and ascend beyond itself was also part of the reality of things – every bit as ‘real’ as the dead fly in the spider’s maw.

And had not his son, his own dearest creation, been just such a spinner of spells, a weaver of stories to catch human hearts?

On  a February morning like today’s, Mr Golightly would have delighted in every corner of the moor.