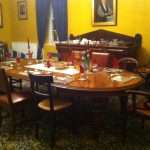 Mugs of tea and slices of fruit loaf, the range well stoked with turf, we looked out at the snow falling in the yard. “The wind is to turn tonight, to the south-west. More gales. There’s not much shelter here”.

The coldness of the February day prompted memories of summer days and of work on a local farm. “I used to do work for them in the summer time. You would go back to the house for your dinner at the end of the day. There was a stove just inside the door and a big iron pan on it. He would take a couple of slices of bread and throw them into the fat; the fat was so deep that the bread would be boiled rather than fried. The pan was never washed; there might have been a year’s accumulation of fat in it. He would throw a couple of chops into fry, but would never leave them long enough, they would only be half cooked. I would sit at the table and eat around the edges of the chops. You couldn’t eat the middle; you couldn’t even cut through the middle”.

Despite the fact that he knew what to expect, he did not decline the offer of dinner. To have refused someone’s food would have been a deep slight on them.

His tale of the evening meal recalled a similar account from another farmer a couple of years ago.

“She cooked on an open fire; not even a range. The old kettle hung above the flames. She would have been sat with a cat, or maybe even a chicken in her hands. She offered me tea one day and picked up the teapot from the ashes at the edge of the hearth. Then she picked up the tea caddy and, never washing the hands, took out fingerfuls of tea, sniffed them, and put them in the pot. She then put the teapot back down on the hearth and got hold of the kettle. She poured the water into the pot while still standing; half of it missed the pot and sent clouds of ash flying in the air”.

“Anyway, the tea was left to brew and she got a couple of old cups and put a drop of milk in them both; then she poured the tea into both cups. She put a spoon of sugar into one of them, gave it a stir and then tasted the spoon. It was not good enough, so she put another spoon of sugar in. She tasted it again and must have thought the cup of tea was all right, for she then handed it to me to drink”.

“She would have been in her early-90s at that time. She lived until the age of 98. I would never have been rude and refused anything”.

From ancient times, there seems to have been something in the offering of food and drink that has been sacred, the offering and the receiving of hospitality have seemed marks of respect for people. A rejection is a rejection of not only what is placed on the table, but also of the person who has offered it.

Drinking strong tea and eat freshly buttered fruit loaf on a bitterly cold winter afternoon seemed an appropriate recognition of tradition, a matter, even, of duty.