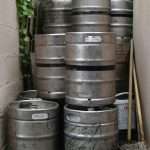 Radio 4 Extra is airing a marathon dramatisation of James Joyce’s Ulysses. A friend says Ulysses is better as listening than as reading. Listening to the second episode, he has a point; dialogue read by actors more readily captures the attention and imagination than print on a page.

A long book, Ulysses is brief compared with the writing about it. Perhaps, among all that writing, someone somewhere has calculated how much of Leopold Bloom’s day is spent in public houses, how much of the narrative revolves around the consumption of alcohol. Even Leopold Bloom himself is intrigued by the wealth to be earned by pub landlords in a city where there was so much competition. Bloom wonders,

“Where do they get the money? Coming up redheaded curates from the county Leitrim, rinsing empties and old man in the cellar. Then, lo and behold, they blossom out as Adam Findlaters or Dan Tallons. Then think of the competition. General thirst. Good puzzle would be cross Dublin without passing a pub”.

There were said to be a thousand pubs in Dublin in the time of Joyce. Alcohol problems and the chronic drain on the household income of poor families did nothing to diminish the place of drinking in Irish culture.

Woken in the early hours of this morning by a group of young men in loud and tuneless voice, heading for their beds after a night of alcohol consumption, the drinking culture seemed less than attractive. It is a culture that has nothing to do with alcohol prices, nor with licensing hours, drink is far cheaper in France and licensing hours seem not to exist; it has to do with a belief among some young men that a good night out demands reaching a point where speech is slurred, walking is unsteady, and memory impaired.

There seems a perception that there is something almost heroic in reaching a point of virtual senselessness, but it is not a recent development, a century ago poet James Cousins’ pondered such excess. In his poem High and Low he wrote:

He stumbled home from Clifden Fair
with drunken song, and cheeks aglow.
Yet there was something in his air
that told of kingship long ago.
I sighed – and inly cried with grief
that one so high should fall so low.

But he plucked a flower and sniffed its scent
and waved it toward the sunset sky
Some old sweet rapture through him went
and kindled in his bloodshot eye.
I turned – and inly burned with joy
that one so low should rise so high.

If staggering home drunk can be thought noble, how will anything change?