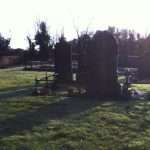 A February hoar frost carpeted the churchyard, in the air the sunshine might have brought a sense of spring, underfoot there was still a deep midwinter, crisp coldness. The light of a morning sun, low in the sky to the east, created sharp shadows, trees and gravestones became dark silhouettes in the morning light.

Among the headstones, the more expansive inscriptions might include a Bible verse, or line from a hymn, most are sparse, understated: “In loving memory of . . .” their name, their age, and the townland from whence they came. Headstones that are plain and stern, as serious as those whom they commemorate, stand in strict lines that they may face the rising sun. There are no statues here, no holy pictures, no sacred hearts inscribed in marble stone, if a statement of faith is thought appropriate, it is in words and not images.

Church of Ireland graveyards are not entirely prosaic places, though, one at least inspired John Betjeman to verse. In his poem “Ireland with Emily”, Betjeman conjured a vision of the Church of Ireland that consisted in crumbling buildings and isolated handfuls of people who were the last of the line.

There in pinnacled protection,
One extinguished family waits
A Church of Ireland resurrection
By the broken, rusty gates.
Sheepswool, straw and droppings cover,
Graves of spinster, rake and lover,
Whose fantastic mausoleum,
Sings its own seablown Te Deum,
In and out the slipping slates.

Betjeman’s suggestion that people might be awaiting a “Church of Ireland resurrection” seemed a piece of gentle mockery, a jibe at those who had so much lived their lives as a people apart from the general populace that on the last day it might be thought that they would look in hope of a Protestant Second Coming. Perhaps, like most caricatures, there was a kernel of truth in the lines. In times when the Ne Temere decree was strictly enforced, and when Archbishop John Charles McQuaid actively sought to squeeze Protestant influence or presence from every sphere of life, separateness was a strategy for survival, but those days are past.

Walking between lines of graves, there is a sense that this is a matter of fact place. Few Church of Ireland buildings are of great architectural merit, some even verge on ugliness. Plain, unadorned 19th Century edifices that speak often of straitened financial circumstances, but often also of plain belief. “God” and “heaven” are not subjects for contemplation nor for mystical reflection, they are just things that are, or, as the case may be, are not (being Church of Ireland, and even attending church on Sundays, does not necessarily rule out someone believing that God and heaven are not). In this place, though, faith is about plain belief, and the last day awaited is a plain resurrection; one day they will rise.