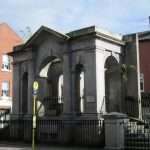 “Bang Bang”, he said, pointing at a picture of a man, hanging on the wall of the snug. “He used to have an old church key that he pretended was a gun and he would pretend to shoot at people with it. He would stand on the platform at the back of buses and he would “shoot ” at people on the pavement, and , he was so well-known that they would shoot back at him. There used to be gunfights on the streets of Dublin like those from a cowboy film. Look him up on the Internet”.

We did. A search for “Bang Bang” on Google.ie produced him as the first result (beating the Nancy Sinatra song into second place). Bang Bang has his own Wikipedia page. Thomas Dudley (his real name) might have died in 1981, but his fame is still sufficient for him to come out top with a search engine.

It would have been hard to make up the character of Bang Bang. Were he a figure from Irish literature, he would seem more likely to come from the surreal and satirical stories of Flann O’Brien than from the social realism of John McGahern, except Bang Bang was a real person.

The survival of the “characters” in an age of mass media and increasingly monochrome culture has been extraordinary.That Bang Bang was the first result on a Google search testifies to how much such people are still found interesting. Hopefully, there are still people like Bang Bang; people who have a capacity to remain completely impervious to social trends and peer pressure. Such people are the advertising executive’s nightmare and the storyteller’s dream, the characters are rugged individualists, uncaring of the opinion of others, untroubled by remarks of others, no matter how cutting.

What is it in characters that allows them to become “characters”? What is it about Bang Bang that still intrigues people? Is there a desire to know about the person behind the cowboy games? What personality traits allow such a degree of independence from the world around? What, from their psychological make up, might we learn in order to be autonomous people; what might we learn about being ourselves in a society that tells us to conform and to be predictable?

Bang Bang’s name is inscribed into the steps of the memorial arch for the Coombe Hospital. He would probably have liked that; it would have been a good vantage point from which to fire at passers by.