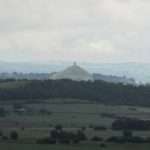 The English architect sitting in the Dublin pub came from Somerset and not only did he come from Somerset, he knew the villages I called home and he knew Glastonbury.

Glastonbury was the centre of the world when I was a child; the stories with which we grew up made it the most important place in Britain. It was a place that resonated with hope of a different and a better world.

Legendary history still has the power to fire the imagination. Even a Dublin pub has not the magic of Merlin.