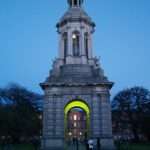 In the quietness of a spring evening, a church bell rings in the cold air announcing the arrival of a funeral. The sound of the strokes has a chilling quality.

In ordination training days the bell toll was from the campanile in the grounds of Trinity College, as the hour appointed for an examination approached and students clustered outside of the examination hall, the deep sound would fill Front Square and strike fear into the hearts of many of those gathered.

In parishes the tolling of a single bell is a sound of grief. A single strike and a lengthy pause before the next as mourners file into church. There is in the sound a sense of finality, a sense of one’s mortality.

The toll of the bell finds strange resonances deep within the memory.

Echoes from childhood are heard at unexpected moments, snatches of verse, half sentences. “I”, said the fly, “with my little eye”. I hated that poem.

Why did school children in the 1960s get taught “Who killed Cock Robin?” It’s of dubious historical origin, little literary merit, and there must have been not a few children who found it disturbing.

All the birds of the air fell a-sighing and a-sobbing,
when they heard the bell toll for poor Cock Robin.

The sound of the bell brings the words once more to mind, “I”, said the bull, because I can pull.” The chilling memories of childhood fear come to mind.