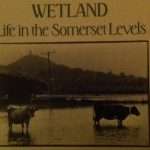 After years of obscurity, the Somerset Levels have become a regular news feature. Whole villages cut off by rising waters, homes and farms being evacuated; the Farmers’ Guardian today carries news of a farm being looted. Searching for happier memories of my home area, I opened “Wetland”, Patrick Sutherland and Adam Nicolson’s 1986 book on life in the Somerset levels.

Patrick Sutherland’s photographs and Adam Nicolson’s prose capture the existences of the men and women for whom this part of England forms the background and substance of their lives. As the Wetlands come under threat from both the forces of modern farming and the contradictory, complex demands of conservation, this book provides a lasting poetic record of what may well be a passing way of life.

A passing way of life? The book shows a world anachronistic even in the 1980s; a farmer in a field milking by hand one of his herd of thirteen cows; loose hay being loaded onto a trailer with pichforks; cider being pressed in farm barns; sheepskin coats being stitched by a woman working at home. Anachronistic, it may have been, but it allowed potential for a future. What future is envisaged by those who planned the flooding of the Levels this winter?

The tension manifest in current discussion of the Levels was present in Adam Nicolson’s 1986 interviews for the book. One farmer spoke forcibly,

“We’re not old rustics out in the sticks here, you know. You’ve got to have a bit of push in a place. And we’ve got to leave all that rubbishy, non-productive scrubland behind. You could never do anything with it. It was waterlogged and boggy.”

Nicolson acknowledges the divergence between the views of the farmer and that of a government agency at the time, the Nature Conservancy Council.

“‘Waterlogged and boggy’ means one thing when you are sitting at a Nature Conservancy Council desk and the opposite if you are driving a forage harvester. The confrontation is utterly symmetrical, using the same words to opposite effect”.

It is six thousand years since the sea retreated from the Levels; for centuries they have been drained, allowing an improvement in the quality of the farmland, allowing farmers who would have a better living than that offered by milking a herd of thirteen cows by hand. For generations, ways of life have passed.

(It says something about government awareness of the communities affected that the press officer could not spell, “Bridgwater” correctly).

The press release says, “Wildlife will benefit from raised water-levels. These are needed by wading birds, such as snipe, lapwing and redshank – all of which have suffered serious declines in the last 25 years”. Why should a period twenty-five years previously have been as definitive? Snipe, lapwing and redshank seemed more important than communities. Who gave a government minister the right to take such a decision? Pursuing the logic of restoring the Levels to their original state would see the return of the sea to the heart of Somerset; the passing of every way of life.