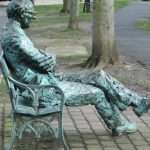 Walking through the corridors of the old people’s hospital, it was encouraging to see that the geraniums in the pots along the window sills were coming into flower. Perhaps it was the appearance of the flowers that prompted the choice of the song. From the diversional therapy room (that’s what it says on the sign outside), came the sound of people singing. “The summertime is coming, and the trees are sweetly blooming, and the wild, mountain thyme grows around the blooming heather”.

A nagging question returned. What tunes will there be in thirty years’ time?

I have spent three decades visiting older people in nursing care. For many of those people, music is something very important. Familiar tunes and words can transform the moods of those gathered there; no matter that the same tunes might get a run out each time, no matter that only snatches of the words may be remembered, it can be positive and life affirming to see otherwise distant people engaging with what is happening

Perhaps the current nursing home generation are the last generation who will have songs that they might sing, or even tunes that they can hum. Street music has disappeared, the sort of thing that might be sung in nursing homes in a generation’s time is no longer being written. Van Morrison was on the car radio singing, “I’ll tell me Ma;” in thirty years there will be no equivalent song for a future Van Morrison to sing.

Perhaps the very things that made popular music a big industry were the very things that took it away from ordinary people; records and the radio made music something for professionals, something to which ordinary people sat and listened. Who were the last people to write a song that might one day be played on a drawing room piano while elderly and frequently confused people join in the singing? Who is there now that has written anything that will remain in the long term memory?

Our instant access to music offers almost limitless options, but in the complete freedom of individual choice, we have lost what we might have had in common. In a generation’s time, when there are fewer and fewer who remember the words of the old songs, what will there be left to sing?