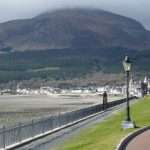 Pat visited us when we moved to Dublin. Always fit and with a love of walking, she set off one day for the beach. Coming back, the streets were unfamiliar and she missed our gateway and went to the wrong door. It was the following Christmas before she was due to come and stay again. A couple of days before the train journey south, she phoned to excuse herself; she wasn’t feeling well.

In the months that followed, there were a number of alarming moments. Unable to find her car, she had gone to the police station to report it missing; the police had found it, in a different car park. Her solicitor had met her in a light summer dress, walking the promenade on a biting winter’s day. She had stopped going to the corner shop after the girl at the till had suggested to her that she had bought the same things earlier in the day. She had phoned the mechanic who looked after her car because it would not move; she had tried to turn it around inside her garage and had wedged it diagonally against the walls.

Phoning Pat’s doctor, we were told that we were being alarmist and that Pat was just a little forgetful. Pat maintained she was well and would be down for Christmas. When Christmas Eve came, she again excused herself.

Further calls to the doctor prompted assurance he would keep an eye on her. It was to be of no consequence, she fell down the stairs and broke her back and was crippled for the remaining years of her life.

The confusion seemed to arrive like a wave, sweeping all before it. In hospital in Belfast, a lifelong Unionist, she instructed visitors not to sit in a particular chair as the Pope was coming. She developed a story that she had broken her ankle and would be in hospital for ten days, but would be out and about again soon – a story that she repeated for the rest of her life.

There was no option other than nursing home care, Pat required specialized lifting. The decision she should go into a beautiful home a few hundred yards from the house where she had lived brought the ire of her friends. There was nothing wrong with her, they insisted. She just needed time to build up her strength. They brought books from the library that she never opened and writing paper that never bore a single word. It was wrong that she should be in a nursing home, they said, she still got her Daily Telegraph each day. She did, it was as pristine in the evening, as when it had been delivered in the morning.

Their seemed a conspiracy of denial amongst her friends. When they saw that Pat was capable of neither reading nor writing, and would never return to her house, they stopped visiting altogether.

Perhaps it is the old stigma, perhaps people still have odd notions that being confused is somehow something embarrassing, something about which not to talk. Who are they protecting?

Confusion, dementia, Alzheimer’s, are amongst the most common of illnesses, yet to admit someone was suffering is treated almost as some sort of moral failure. Caring for Pat was made considerably more difficult by those who refused to recognize the truth; there must be many, many people who have had similar experiences.