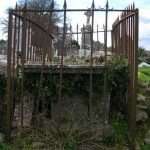 The centenaries will now start to come thick and fast. Next week marks the hundredth anniversary of the Curragh “Mutiny”; once the summer is reached the centenary of major moments in history will pass on at least a weekly basis. The centenaries are probably safe history for most people, but in this small corner of rural Ireland, as with many other such places, the centenaries will evoke painful, sometimes unresolved, memories. There will be tales of unforgiven wrongs and bitterness that lasted beyond the grave.

There was never an opportunity to revisit a conversation from three years ago, never a chance to ask if the man, who had talked about the troubled times, thought there would ever be a healing of the memories.

“It was lucky nothing happened to my father, he lived close to the captain’s house”.

The conversation had stepped back to the years between 1916 and 1921. “Was the captain burned out?”

“No, they left him alone. They bided their time and wrecked his grave. The railings are broken; the stones cracked; and the weeds were allowed to grow over it”.

“Is this in the cemetery up the road?”

“It is, you can see the captain’s grave again now that the cemetery has been restored”.

“I suppose it was their way of gaining revenge”, commented our companion.

He pondered the comment and then responded, “‘vengeance is mine, I will repay’, saith the Lord'”.

The conversation moved on to happier ground. Only hours later did what had been said become clear in the mind.

The discussion had been of a landowner, who had not been forced out. The smashing of the landowner’s gravestone had been described as an attempt at revenge. The expected response would have been a condemnation of a piece of vandalism, instead there was a verse from the Bible. He seemed to say that the problem lay not in the damage itself, but in the attitude that vengeance could lie in human hands.

It seemed a strange comment from a traditional, conservative. rural Protestant who would have held in contempt anyone responsible for lawlessness. Perhaps there were further questions that might have been asked about the captain, but the questions seemed to risk opening up seams of memories that brought an obvious pain. At the time of the conversation, silence and repressed memories seemed probably a better option than excavating a past that was long past being changed. But if there is purpose in observing the centenaries, it must surely be to open up the past, to ask the awkward questions, to address the truth, or otherwise, of collective memories, to resolve the unsettled business of those years so that it does not remain a burden for another hundred years.