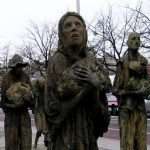 Listening to a radio phone-in programme back in the 1980s, there was an item in which a presenter asked people about stories they had heard from their parents. A gentle, softly spoken man phoned to say his father had told him stories of the American civil war. The programme presenter was initially sceptical and, presumably prompted by a producer, became downright dismissive of the man’s story, suggesting it was impossible for his father to have told him any such thing.

It was audibly clear that man was hurt by the response he had received. He had telephoned in good faith and had been virtually ridiculed. “My father died at the age of 97 – in 1937”. One could almost hear the cogs turning in the presenter’s brain as he did the mental maths – the caller’s father had been born in 1840; living in the United States, he would not only have remembered the Civil war, he would have been in his mid-twenties. The presenter attempted an apology, but the programme had been soured.

Visiting a nonagenarian lady in a farmhouse at Ballee in Co Down in the early 1990s, the civil war story came to mind. “Mr Poulton”, she said, “my grandmother used to talk about there being a terrible fever here and there being food given out to people up at the corner of the road”. The memories of the grandmother were of the fever during the Great Famine; it would have been 1847. This was a second hand account of times almost 150 years previously.

Oral tradition was the way in which history was passed on and had the capacity for being extraordinarily faithful to the facts.

Canadian writer Pierre Berton’s The Arctic Grail tells of the visit of Charles Francis Hall to the coast of Baffin Island in 1861,

” . . . what really intrigued him was an interview with Joe’s grandmother, a woman who must have been a hundred years old and who told him of stories she had heard as a child about ships and white men who had arrived many years before her time and left behind supplies that Hall recognized as coal, brick, and iron. The first arrivals, she said, had come in two ships. The following year, three ships came. The third year, many ships arrived. Hall was astounded, for he knew that Martin Frobisher had made trips three successive years, first with two ships, then with three, finally with fifteen. There were other details that fitted written his­tory, including the tale of five seamen whom Frobisher had lost one of the voyages. It dawned on. Hall that the folk memory Frobisher’s expedition had been handed down orally for nine generations.

Other clues from Frobisher’s day began to turn up. On one of his sledge journeys to an Eskimo village near Frobisher Bay, Hall upon a piece of red brick. Joe told him that as a child he had played with many such bricks left by the white men years before. Hall was transfixed. He was holding in his hand a relic of an expedition that, just eighty-six years after Columbus’s discovery of America, had visited these shores”.

Frobisher had visited in 1576; Hall arrived in 1861; 275 years later the first visit was still being recalled with accuracy.

Long gone are the times when history was conveyed by word of mouth, the supply of knowledge is now dominated by a few major players. No longer are stories passed down the generations; people searching for knowledge now turn to a search engine before asking someone older. Information gleaned from the Internet is considered definitive; stories from other people are just opinion.

When it reaches the point where no-one tells stories any longer, which Internet stories can we be certain are true?