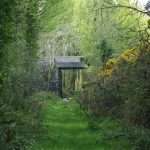 Driving the lanes of southern Co Wexford in spring sunshine, there was a slight fear that some resident might think suspicious the behaviour of two men stopping in unlikely places and staring at unlikely buildings. The answer we offered for our actions would hardly have persuaded someone not to call the local Garda station, that we were looking for traces of a railway line that had run from New Ross to Macmine Junction, on the line between Wexford and Enniscorthy. Only an older person would have remembered that the line had existed; it closed to passenger traffic in 1946, and the last sugar beet train that ran on it was in 1963, when the line was closed.

Finding traces of former railway structures tucked in the folds of rolling farmland and among the scattered houses of the rural communities, it was hard to imagine that trains had once run through these landscapes. A 1904 timetable shows a total of eight trains in each direction between New Ross and Macmine, some passenger, some mail, some goods. Steam locomotives would have been a regular sight to those working in the fields and travelling the roads: the modest stations would have been important features in the daily life of the community, transporting people, produce and post.

Perhaps, fifty years ago, the closure of the railways in much of rural Ireland was the first block in the dismantling of rural communities. Of course, they were not viable, but they were places where people gathered, places that offered a relief from loneliness and isolation. In the decades that followed, places of human interaction continued to disappear from townlands and villages. Farriers, creameries, shops, schools, Garda stations, pubs: one by one, places that had been part of the fabric of everyday life disappeared. Access to motor cars, market economics, new technology, each new development militated against the survival of establishments patronised by fewer and fewer people.

In many rural communities, apart from the scattered churches, the only place of public interaction that remains is the post office. The loud voices of protest against those who would oversee the closure of swathes of small post offices is not just about a desire to continue to be able to buy postage stamps, or to be able to collect a pension in the form of cash over the counter, it is a protest against a cumulative process that has lasted five decades.

Perhaps the post offices will go the way of the line from New Ross to Macmine, it is hard to argue with the bottom line of balance sheets. If they go, it will be one step further towards an atomised society where the loneliness and isolation of many rural dwellers is secondary to monetary values.