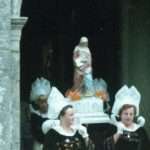 Sailing on a Brittany Ferries vessel from Plymouth on a July morning in 1986, anticipation mixed with apprehension. A Renault 5 was not the most capacious of cars, even with just two of us there was little spare space once a tent and assorted camping equipment had been loaded. It was a first French holiday, a first time driving on the right, a first time being immersed in communities where no English was spoken; the possibilities of disaster seemed numerous.

The passengers included a large group of French teenagers in buoyant mood, perhaps they were returning after a language exchange, enthusiastic to be back among friends, Bastille Day was past but six weeks of the long holidays still remained.

Caught between a sense of anxiety about what lay beyond the quay at Roscoff and the infectious cheer all around, looking up from the pages of a novel, a video screen in the passenger lounge was filled with an ice cream advertisement, in memory it was for “Miko”. The advertisement was a series of beach scenes featuring the product being eaten by people of all shapes, sizes and ages, but it remains in the memory because of the backing track, “Like Ice in the Sunshine.” The song was a jingle made for Unilever’s German ice cream brand “Langnese”  in 1985 by Beagle Music Ltd. It became a pop hit in Germany in 1986 and was used to promote Langnese’s sister brands.

The song is banal, unimaginative and repetitive, but is irrepressibly cheerful. Maybe it is its association with sailing away for a holiday, with days spent entirely incommunicado (our first mobile phone was still nine years away), with encountering a very rural France that has now almost disappeared – but maybe it is simply cheerful.

Yet a single piece of music seems to have the potential to evoke differing reactions in different people. “Ice in the Sunshine” would undoubtedly annoy many listeners, even if they enjoyed the ice cream, but even much more serious music does not command unanimity of appreciation. The sort of music favoured for use at solemn moments may be as quickly disparaged as being as cliched and as dull as advertisements for ice creams.

Perhaps someone has a definitive piece of research on which music provokes which moods. If so, it seems odd the advertisers have not seized upon it.