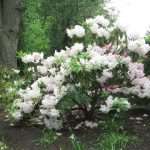 “The yellow blossom on the tree in the corner is lovely; there seem to be far more flowers this year”.

The Best Beloved looked mystified, “which tree in the corner?”

“The laburnum trees? They are very poisonous”.

The smart rejoinder would have been that I had not intended to eat them. It was a new tree to add to my list. It is not hard to believe the story of the man who knew only one sort of tree – it was called “tree”. Having a list of trees that runs to oak, not-oak, conker, silver birch, Christmas, and now laburnum, it is not hard to imagine someone having as little knowledge as I have.

This is despite the best efforts of Miss Everitt, who took the primary school class for Nature every week, trying to teach not only the sorts of trees and flowers, but also their components – sepals and stamens and all that sort of stuff. The list of recognizable flowers is longer than that of trees: daffodils, tulips, primroses, cowslips, things that might be bluebells, the red yokes in the corner, and lily things that give me hay fever on Easter morning.

It must have been hard to have got through an entire education in rural England without developing even a slight awareness of the countryside around.

Not being any lazier than the next person when it came to studying at school, what happened that an entire component of education seemed to disappear? Historical stuff like the day of the death of Marie Antoinette and the youngest person in the Royal Navy to be awarded the Victoria Cross stuck in the brain (16th October 1793 and Jack Cornwell); English was not bad, except for the handwriting classes; arithmetic was manageable, even the long division; but ask what was the tree that grew in the hedge beside the school field, and there would be bewilderment.

Perhaps it was just dislike of the everyday familiar things – like Irish people who studied the first national language for fourteen years and left school with not much more than a handful of words and an aversion to Peig Sayers. Perhaps it was a failure to develop a sense of beauty, a sense of those things that made everything else around seem different.

It’s not just an inability to identify laburnum; it’s a lack of a vocabulary to describe the abundance that surrounds on a May afternoon; it’s walking through the magnificence of Altamont Gardens in Co Carlow and having no words to name things.

Perhaps Miss Everitt’s classes should have been called “Beauty” rather than “Nature.”