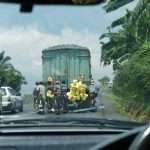 “Seven of the world’s riskiest roads” announced the headline for a BBC feature on seven routes through difficult terrain. Roads can be risky for reasons other than the physical condition of the surface along which vehicles travel, or the dangers of ascents and descents, ravines and cliffs. Africa could provide countless roads more risky than those described by the BBC website; risks posed not by boulders or craters, nor by landslides or floods, nor by extreme heat or cold, but by ordinary men with uniforms and guns.

Reaching the border of Rwanda and Burundi one Saturday afternoon five years ago, a friend stood waiting. Pausing on the unremarkable bridge that marks the frontier, he stared into the river. “In 1994, that river was filled with bodies, they threw the bodies into the water and said it could carry people back to Ethiopia – they thought we looked like Ethiopians”. It set the tone for the evening.

“We have some business to settle before we can go”. We walked through a huddle of ramshackle buildings south of the border that marked Burundi as a country significantly poorer than its norther neighbour. The business, it transpired, was to settle matters with a woman who claimed his car had knocked her over, “She walked into my car and then fell over”, he muttered.

We got back into the car, and so did the policeman.

“We must take him back to the station”.

A few minutes later, my friend called back. “Have you another 2,000 francs?”

“Because he says he had to hire that motor cycle taxi and we must pay his fare.”

Reluctantly, I handed over another two notes. Not long later, my friend took out his wallet and gave the policeman the money he had.

“Why are you giving him more money?”

“Because the journey is longer than he thought”.

Satisfied with his bribes, the policeman left our company at the next small town. Our journey was at least two hours behind schedule, we would not make Bujumbura before the roads were closed

Darkness had fallen as we reached a small town where the traffic was at a standstill. It was 6 pm and the curfew was being enforced – soldiers had blockaded the road. It was an anxious moment. My friend swung out into a short line of vehicles queued at a barrier where men with automatic rifles stood looking around uneasily. There was silence.

Suddenly a barrier is lifted. A pick up with an armed policeman standing in the back accelerates away, followed by a shiny jeep. Three vehicles follow, ours is the last of the line of five.

“We must stay with this convoy.”

The car slid around wide sweeping bends; the speedometer showed between 80 and 100 kmh, far too fast for a Burundian road in darkness.

“Why are they going so fast?”

“This is bandit country – but they will not trouble us”.

“What would happen if the barrier had not been lifted?”

“We would have gone to a guest house in the mountains, run by German missionaries”.

“What if there was not that option?”

“People have to decide what is cheapest – to pay for somewhere to stay, or to pay the policeman to lift the barrier”.

There were moments on the steep descent into Bujumbura when my friend seemed to struggle to hold the car on the road, a strange noise comes from the wheels. The next day’s schedule is filled, so it is Monday before the noise can be investigated. The car’s brake pads are worn entirely away; it is a miracle that we had not plunged off the road, disappearing into an African night, never to be seen alive again.