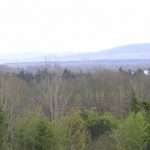 “My mother wrote to me and said that she needed help and told me my place was back on the farm.”.

The gulf between the two worlds was wide. The seaside and the city, trains and trams, electricity and running water, cinemas and theatres, friends and freedom; all exchanged for a world little changed in decades. 1940s Ireland had little to redeem it. Impoverished and isolated, people had been leaving for as long as anyone could remember and would continue to leave for many years to come. In the end, European money and economic growth would disperse the gloom and break the yoke of religion.

But, in the meantime, what about that letter? What did it mean to return from the life of the city to a farm deep in a rural community?

It would have meant a world that contracted to a radius that extended no further than one might ride on a bicycle over rough roads. It meant news from the outside world coming through a battery powered radio, or through the morning newspaper. It meant a house lit by candles and oil lamps, where every chore was done by hand. It meant entertainment being confined to dances in the local parochial hall or church socials. It meant having no income other than the few shillings that might be given from time to time, for few family farms had cash to spare.

The letter of summons to leave a street of fine Victorian houses, a street that led to a station from which a train might carry one to the city centre in minutes, and to catch a train instead deep into the countryside to be met by a pony and trap, must have been read with a heavy heart. To leave a comfortable suburban home to return to a village where electricity was still years away and where comfort was thought indulgence would hardly have been a pleasing prospect.

Our conversation paused and staring over the teacup at a calendar on the wall, there was a moment to ponder the woman who had received the letter. How much different might her life have been? How much upset had been brought by a single sheet of paper?