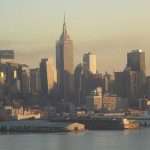 The sixteenth anniversary of the death of Frank Sinatra and a record by Ol’ Blue Eyes gets a spin on RTE’s John Creedon Show, Sinatra’s version of The Beatles’ “Something in the way she moves”. The programme is an odd place for him to find an airing; among the rock and reggae and Irish and folk, the crooner still commands a place of affection.

Sinatra’s voice recalls a melancholic spring evening in Bray. In eleven years we had gone to watch Bray dozens of times; on maybe more than a hundred occasions we had gone along to watch a team that won nothing for season upon season. Sitting with a pint before catching a train home, a female duo filled the pub with sound; the songs had a retro feel, maybe reflecting the age of the clientele. A disco song must have been sung, for we discussed how discos had ended.

In memory, Jeff Beck’s “Hi ho, silver lining” concluded a Somerset disco in the late 1970s. In Roscommon in those times, the ending was very different, Frank Sinatra’s, “New York, New York”.  It seemed unthinkable that a DJ at one of our sixth form college discos or eighteenth birthday parties would have contemplated such a choice; the occasions were boisterous at the best of times, playing Sinatra to people more inclined to Status Quo would not have been well received.

It is more than thirty years since I was last at a disco; perhaps “New York, New York” still gets an airing in Irish clubs, perhaps its lyrics reflect the mood of 2014. RTE news this morning carried news of an “emigrant wake”, friends gathering to say a sad farewell to someone leaving the country in search of a new future. Emigrant wakes in former times were often the very last time that family and friends saw the person departing, the best for which they might have hoped was occasional letters and perhaps a return visit years later. In our own times, cheap flights allow frequent returns, and electronic technology allows daily communication, but there is still an overwhelming sadness at having to leave home and friends and community.

While, in Somerset, we sang along to Jeff Beck lyrics that didn’t really mean anything to most of us, in Roscommon, “New York, New York” captured a sense of a city almost beyond the imagination of someone in rural Ireland (as it would have been beyond the imagination of most of us in Somerset). While we concluded the night with raucous singing, Irish teenagers seemed to conclude with a song of hope.

Maybe in the years before his death on 14th May 1998, someone told Frank Sinatra of how he had brought cheer at the end of a night out.