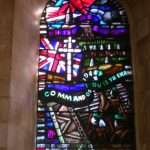 Seventy years ago today, my friend Archie set foot on a beach in northern France. He was 21 years old at the time. He was from Newtownards in Co Down and had volunteered to join the Royal Air Force three years previously. Archie trained as a radio operator, imagining that this would lead him to becoming the member of a bomber crew. However, the Canadian army were short of radio operators and Archie was transferred to serve with the First Canadian Army. Thus it was on 6th June 1944 that he found himself leaping into the water from an allied landing craft with a radio pack on his back and running onto the beach at Saint Aubin sur Mer. The beach had the code name “Juno”.

Archie avoided commemorations, he took the view that they didn’t capture the horror of the events. When books were published to mark the 60th anniversary of D-Day in 2004, there seemed to be many veterans who shared Archie’s opinion. Martin Bowman collected a series of reminiscences in his book “Remembering D-Day: Personal Histories of Everyday Heroes”. Bowman quoted from Donald Burgett, a member of the 101st Airborne Division who was nineteen years old when he landed in Normandy. Burgett says, “It was dirty and dehumanising and disgusting . . . I just hope that when they make their fine speeches on the beachheads they remember what happened. I do. Every night of the year. The images of the dead always wake me up”.

We went to Saint Aubin sur Mer back in the Nineties, it’s close to the ferry port of Ouistreham. It was a wet afternoon in late August, the seafront was deserted. At one end of the promenade there was a plain stone on which were inscribed the names of those who did not make it off the beach on that June day. Leaning on the railings and looking out at a grey sea, it was hard to imagine this anonymous French town had once been at the centre of a major event in world history.

Imagination is important. Losing the capacity for imagination meant that wars became about sets of statistics. D-Day in the school history books became not the experiences of those involved, but lists of casualties, descriptions of the forces and the weapons involved, timetables of events. There was no understanding of D-Day as it really was for those who were there; there was no encounter with the reality of that far off June day. Archie could have told it as it was.