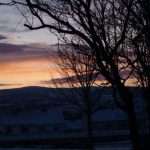 Switching to BBC 4, “The Sky at Night” was beginning, a programme that has the great advantage that it is so specific to the date on which it is broadcast that it cannot be repeated for years afterwards.

A market researcher once called at my grandparents’ farm and endeavoured to carry out a survey with my grandfather. “What television programmes do you watch?” asked the hopeful researcher. My grandfather, never a man to sit at the fireside when there were things to be done, answered honestly, “I watch ‘The Sky at Night'”. In times when there were only two or three television channels, and when the limited choice of viewing meant that there were programmes with audiences of tens of millions competing for airtime, “The Sky at Night” was aired in the late evening, sometimes not much before midnight and, as now, was a monthly broadcast.

Encountering someone who had access to television every evening, but who watched it for half an hour a month was probably an experience the researcher remembered for sometime afterward; recounting it would have become a cautionary tale about who one chooses for the completion of a questionnaire. It is hard to imagine much useful marketing data would have arisen from a conversation with my grandfather.

Why did he watch “The Sky at Night”? His formal education had been limited, severe asthma in boyhood days had prevented regular attendance at school; astronomy would not have been an immediately obvious choice of television viewing for someone who had spent his life working the land.  By the time my grandfather was prepared to sit down and look at the television set, perhaps “The Sky at Night” was one of the few interesting programmes still left in the schedule. Those were times when channels broadcast for perhaps seven or eight hours a day, once it was midnight, viewing options became very limited. It seems likely that he watched other programmes as well, half an hour a month would have been very limited viewing, even for someone whose first wish was to be out on the farm, but “The Sky at Night” was the programme that he remembered, the presenter of the programme, was passionate about his subject and spoke in terms that might be readily understood; he succeeded in popularizing his subject in a way that many other academics must have envied.

Forty odd years later, more than twenty years after my grandfather’s death, and his love for “The Sky at Night” still has the power to inhibit a further change of channel. If the current presenters have one fraction of the influence of those past, there will be people watching in forty years’ time because of what someone saw today.