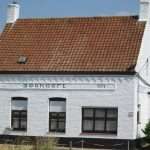 Family history research last winter revealed my great grandfather’s First World War military service record. Not knowing where to find other pieces of the jigsaw, I am very grateful to Ian Gumm of In the Footsteps for filling in the blanks. Yet in reading the details, there is a sense of knowing very little:

I believe PB means Permanent Base, implying that Charles was unfit for active service. I cannot see any of the standard A, B, C or D fitness classifications used on his recorded, but he would probably have been B – Free from serious organic diseases, able to stand service on lines of communication in France, or in garrisons in the tropics; subcategory B2 – Able to walk five miles, see and hear sufficiently for ordinary purposes. Hence his transfer from an Infantry Battalion to the Labour Corps.

Where was Charles wounded?

The 6th Somerset Light Infantry was in the 43rd Infantry Brigade which was part of the 14th (Light) Division. In the time that Charles was with them they took part in the First and Third Battles of the Scarpe which were part of the Battle of Arras during the German retreat to the Hindenburg Line. They were subsequently moved north to the Ypres Salient where they took part in the Battle of Langemarck and the First and Second Battles of Passchendaele.

Charles was wounded during the period between the First and Second Battles of Passchendaele. Following the failed assault of the 12th October 1917 the Divisions were rotated and fresher troops put into the line ready for the next attack. The 14th (Light) Division was assigned to be part of Lieutenant General Morland’s X Corps that was part of General Plumer’s Second Army. We know therefore that Charles was wounded somewhere in the vicinity of the Broodseinde Ridge.

On Wednesday, standing at Lijssenthoek, the location of the field hospital through which he was evacuated, I searched for something he might have seen in that winter of 1917.  The terrible beauty of the Commonwealth War Graves Commission cemetery would be a thing of the future; the fields would hardly have been as they appeared now; all that seemed as though it might have been something he would have seen was a solitary white cottage at the roadside, built in 1898

As he was taken from the hospital to the train for evacuation, would the sight of something so ordinary have reassured him that there was another world beyond the hell of the Western Front? Would the sound of the train and the rattling wagons have reminded him of the line passing near his west London home? Would the canvas of his stretcher have told him that though wounded and being evacuated, he had fared better than the ten thousand who would lie in the hospital cemetery?