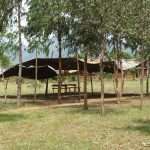 The radio station this morning played Johnny Wakelin’s “In Zaire”. What impression of Africa did that song give to a fifteen year old boy listening to it in 1976? It is hard now to recall. A country that could host a boxing match between Muhammad Ali and George Foreman, a match broadcast around the world, must have seemed a modern and developed place to an impressionable teenager. The bout, publicised as “The Rumble in the Jungle,” suggested Kinshasa must have seemed a vibrant, international city.

What was Zaire like in 1975? Under the dictator Mobutu, it is hard to imagine it fared any better than does Democratic Republic of Congo, the current name for the country. What is life there like? I don’t know, but I know what it is worse what it is worse than.

It was a Sunday morning in a village near the DRC border, more a scattering of mud and rush houses than anything that would merit being described as a village. A small boy ambled over to the car. His walking was severely impeded by his legs being curved to one side; the effects of rickets or polio? It was not appropriate to ask. His eyes did not seem to focus well. He stretched out his right hand and grasped my companion’s left hand, raising his left hand so I might take it in my right. We walked across open ground to the place where people were gathering for the local church’s morning service. The proceedings lasted until midday, during which time the boy sat impassively watching all that happened. He sat alone. No-one seemed to pay him attention.

As we were about to leave, the boy walked up to us. My companion took out his wallet and withdrew a 100 franc note (about 5 cent), the boy grasped it and set off towards where a stall had opened up.

“What was that for?”

“A doughnut; he will buy a doughnut, that is a special treat”.

The village was on the Burundian side of the border. It had been reached on a road that was unpredictable, the tarmac subsiding into potholes, sometimes there being more potholes than road. On the road, there had been a convoy of white buses, with black letters painted on the side proclaiming ‘UN’.

“What are the UN buses for?”

“Refugees from conflict in DRC”.

“I thought the trouble was further north?”

“There is trouble further north – this is different trouble. The buses are going to fetch people who have fled across the border”.

“Where will they take them?’

‘To camps on the other side of Burundi; the UN says they must be 150 miles from the border’.

‘Isn’t that almost impossible in Burundi?’

It is hard now to imagine that there would be a “Rumble in the Jungle” and even harder to imagine that teenagers four decades later would listen to a record without the social media being filled with comments about what the place was really like.