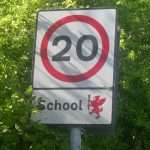 The vagaries of satellite television mean programmes are sometimes watched from unanticipated sources. Foyle’s War is always worth a second (and even a third) viewing and turning on the satellite box brought a string of channels identified as “ITV”. Clicking on the first on the list brought a channel that had advertisements for businesses in places like Bournemouth in Dorset and Beaulieu in Hampshire.

“Beaulieu”, said the Best Beloved, “didn’t you go there?”

There was a lady of a certain age who used to organize a school outing every year from our Somerset primary school. We had to pay for it, each week for a few weeks beforehand we would bring shillings or sixpences, or however much it took. We went on big, adventurous outings for a tiny school in the middle of nowhere. I remember going to London one year and to Poole Pottery and to Brownsea Island on a boat, on another. The outing to the motor museum at Beaulieu had included a visit to the New Forest to see the ponies.

They were magical memories, but they would not have been possible if the lady of a certain age, who was our dinner lady and playground supervisor, had not been prepared to give her time and effort for nothing. No-one ever paid her for the hours spent on the trips, I’m sure we didn’t even have proper insurance. In current times, the trips would probably never take place, the health and safety and public liability concerns would prevent any such plans. The people who would have suffered in 1970, of course, would not have been the middle class kids, but the children from poorer homes who would never have had such opportunities without our dinner lady. I know our family who would never have contemplated organising such an outing just for ourselves; the cost of it would have been beyond us.

The memories of that outing on that summer’s day forty-four years ago are still vivid. It was possibly the first outing I had ever made without my parents. The shininess of the vintage cars created a lasting impression; I could have told you little about their makes and nothing whatsoever about their engineering. By the return journey home in the evening, I had spent 9/6 of my 10/- on souvenirs and, when we stopped for fish and chips, I had to buy salt and vinegar crisps because a bag of chips was 9d.

Memories made possible by a school dinner lady.