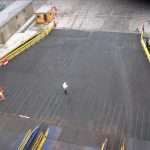 A friend from teenage years went to a college in Yorkshire. Excellent at every sport in which she played, it was no surprise that she was a member of the college hockey team and travelled widely to play in tournaments. Meeting up one day, she told of how the team had travelled to Ireland to play.

It was 1982 and, unless one had hundreds of pounds for an air fare, travel to Ireland meant a day’s journey each way; it was surely a journey that had left impressions. “Where did you go?”

“You were playing another college?

“So was it Dublin or Belfast?”

It seemed incomprehensible – how could one not know whether one had travelled to Dublin or Belfast?

“Where did you catch the ferry?”

The answer offered no further clue – there were ferry services to both cities.

The friend must have sensed my bewilderment. “I just play hockey, I don’t take much notice of the places we go”.

In 1982, both cities were so different from rural Somerset that both would have seemed foreign destinations, both would have seemed places apart. Pondering the conversation three decades later, there is still no conclusion as to where the team might have travelled; on balance, Dublin seems more likely. A team from Yorkshire heading to Belfast would probably have been driven to Scotland for the much shorter ferry crossing to Northern Ireland. If one was on a coach, perhaps there were not many moments that might have set the two places apart – identification documents were not required and a Northern Ireland pound note looked as different from the notes at home as an Irish punt note. Of course, an encounter with soldiers would have marked it out as definitely Belfast, but they would have paid little attention to a coach carrying a women’s hockey team.

The lasting impression left by that conversation was that my friend, who went on to earn a doctorate, could recall nothing from the place she visited that gave it a definitive identity.

It is an experience that could be replicated many times today. Unless one is familiar with national idiosyncrasies regarding road signs, or one makes an attempt at the local language, many parts of Europe seem increasingly indistinguishable. Ports, airports, railway stations, streets, shops, hotels, garages, sports grounds, the things of everyday life have become homogenized – even French toilets have become dully predictable.

A student from England visiting Dublin today would definitely be sure of where they were – the demand for a passport at the airport being the first unmistakeable sign. But travelling by road in Europe, borders can be crossed without them being noticed – in the drive towards union, there has been the advent of uniformity. A hockey team playing an away fixture in 2014 might easily return with little certainty about where they had been.

Isn’t one of the points of travel to encounter things that are new and different? If everywhere becomes identical, why would we go anywhere?