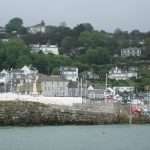 Perhaps it was the emergence of the sun from behind a bank of dark clouds that prompted the recollection. The lady stared out into the garden and recalled her late husband’s purchase of their first motor car. “He didn’t need it for the farm; there was the tractor for that work. As soon as we had a car, he wanted to go to the seaside as often as possible”. Co Wicklow had been the preferred destination, not the most readily accessible piece of coastline when one was driving from the Irish Midlands. How long must it have taken to drive to Bray, or Greystones, or Brittas Bay, on Irish roads of the 1960s?

At a rough calculation, the outings were probably two or three hours in each direction, not leaving much time to actually be at the seaside, but what was the attraction? What was it about beaches and harbours and cliffs and rocks, what was it about water that more often appeared grey or green than it did blue, that inspired people to spend hours travelling to be there?

In childhood years in Somerset, our journeys to the coast were much shorter than those from Co Laois to the sea. Our preferred destination was Dorset; Somerset had its own coastline, but, for us, it was not nearly so pleasant (in our house, the Somerset Bristol Channel resorts had disparaging nicknames that were unfair) . Our experience of days out in Dorset probably did not differ so much from the lady’s trips to Co Wicklow. We went there to be there. It is not that the scenery was spectacular, nor that the waters of the English Channel were warm and inviting (though they were probably more inviting than the Bristol Channel), nor that the resorts had a magnetic attraction, nor that we went boating or sailing. (We did go fishing, but we might as easily fished in a Somerset river as from the harbour wall in Lyme Regis). No, the seaside was about a state of mind rather than being about a place.

The seaside was a land where people smiled and laughed. It was where money could be spent on useless things; souvenirs that might sit on mantlepieces for decades to come. It was where one could eat candy floss and sticks of rock and toffee apples and bags of chips in the same afternoon, and not receive a telling off. It was where pennies could be wasted on slot machines, and sixpences and shillings could be quickly consumed on fairground rides. It was where adults, for a couple of hours, at least, might sit and enjoy the moment and seem to have no worries in the world.

Had I been a farmer trying to make a living in 1960s Ireland, perhaps I would have been like the lady’s husband, heading for the coast at every opportunity; drinking tea from a flask and eating ham sandwiches while sitting on a rug on a pebbly beach. Fifty years later, the journeying is easier and the opportunities for spending money are more plentiful, and there is still no experience comparable with being beside the seaside.