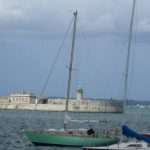 Six years ago, a walk along the East Pier in Dun Laoghaire recalled memories of forty years past.

“Timeless moments seem always to come without warning; some sight, some sound, some smell, brings with it a catalogue of thoughts and images that fade almost as soon as they arise. It becomes impossible, retrospectively, to describe the richness of the moment; perhaps to try to do so would be to try to rationalize the non-rational; to try to bring back to consciousness things returned to deep in the recesses of the mind.

Growing up in England in the 1960s on a diet of Swallows and Amazons and other Arthur Ransome books, boats represented another world: a world populated by people with unlikely names whose lives were filled with adventure and who never lacked the confidence to do whatever was needed. Boats were to be found in places with story book names, and were owned by the occupants of another universe, who drove shiny cars and chatted loudly and laughed a lot.

Perhaps the world of Roger and Titty tacking their little vessel through choppy waters still exists; perhaps there is still a magical land of cheery sailors who have yachts berthed in mythical Solents and who unload picnic hampers from red shiny MG cars that have spoked wheels and fold-down roofs.

Perhaps there is still poetry out there, that tells of a world out of grasp. In a world filled with prose, it would be good to know of something else, something different.

There is a marina filled with boats in Dun Laoghaire, none has ever evoked forty year-off memories, but walking the East Pier in Dun Laoghaire, amongst the sprinkling of boats floating at their moorings, was one, that for a moment, spoke of names like Hamble. It had a hull that was the green of a 1960s Ford Prefect and a deck and cabin of polished wood – this was the boat of timeless times.

For a moment, there was a glimpse of the English Channel and the sound of voices on the sea breeze, laughing voices. The world seemed different, it seemed secure and hopeful, for just a moment”.

Of course, such moments seem unrepeatable, the green-hulled boat would probably be never seen again, and, if it was, would no longer have the capacity to stir distant recollections. Six years and two days after that moment, a walk on the pier, something now a rare occurrence, brought sight of the boat, and, for just a moment, the world was different.