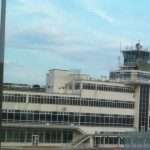 Airports used to be exotic places. The sort of place which seemed to require the wearing a collar and tie, if not a suit – or perhaps that was just Aldergrove.

The fares created the ambience – London in the early-1980s could cost £200 return – only those who might wear smart clothes could afford to fly, most of us rattled by rail from Stranraer to Carlisle before changing trains for the journey south. London Euston to Larne Harbour was a whole day journey, leaving London in the morning, arrival in Stranraer would be in time for the Sealink ferry leaving at seven o’clock. It would be after nine o’clock before the ferry docked, after a crossing that was sometimes undulating.

To fly was a special luxury. British Midland made it more accessible when British Airways’ monopoly of the Belfast route came to an end. There would be smiling ground staff to greet you and to print off boarding cards and there would be a very civilised boarding of the flight as passengers were called by row numbers. Airborne, there would be the offer of complimentary drinks before a meal was served. Landing at Heathrow would bring a blunt of reminder of one’s point of origin, the gates for the Irish flights were at a distant remove from the rest of the arrivals at Terminal 1. Presumably, there were security concerns underlying the “quarantining” of Belfast passengers, but if there were, no-one ever explained.

Any imagined exotic quality has long since disappeared from air travel. Dublin Airport has more an atmosphere of a busy bus station than a place where adventures might begin. Perhaps the departure gates for long haul flights have a different mood, but for the thousands travelling with low fare airlines, it is all very prosaic.

But prosaic is OK. Those of us who might rarely have flown anywhere can travel routinely to see family and friends. Those of us who used much of the little time we had to spare simply getting from one place to another can now be at our destination in a couple of hours. Even the flight times seem set to allow for those whose time is tight – a full day of doing things in Dublin before travelling out to the airport for a late evening flight. A take off time of 10.15 pm, allowing landing in Bristol by eleven and, hopefully, an arrival in Somerset by soon after midnight.

Complimentary drinks and airline food are a small sacrifice for having the chance to fly.