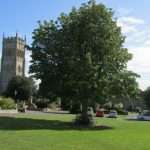 My aunt joined us at a family barbecue last night. My aunt claims to be seventy-five, which is nonsense, thirty-five, maybe; probably no more than twenty-five, though. My aunt remains forever young as long as her transistor radio plays in the farmhouse kitchen.

The programme on her radio that remains in the memory is Two Way Family-Favourites. The programme linked members of the British forces posted overseas with their families back in the United Kingdom and drew an audience of millions. Requests for parents and sweethearts, and for soldiers on distant postings, are tied to the aroma of roast beef and the sound of Bisto being mixed.

Songs like Dionne Warwick’s Do you know the way to San Jose? would fill the kitchen. A song that had a magic about it; a confidence that all was well. Perhaps that was its selling point; it made you feel happy. Bacharach and David did tunes that put the world to rights – for three minutes, anyway.

The world outside of Dionne Warwick was not a happy place; journeying to San Jose was in 1968, hardly a time of peace and wellbeing, yet in the confines of that 7″ single, happiness was to be found. Certainly, LA is not what it promised to be (it would later prompt Gladys Knight to take The Midnight Train to Georgia), but in San Jose there would be friends and space and a place to stay.

Did Dionne Warwick and her contemporaries being played on a Sunday lunchtime create an idealised vision of the past? Could it be that the tunes of Bacharach and David were so beguiling that they glossed over the nastiness of the years?

What if it had been ten years later? In the unlikely event that my grandmother would have not turned the radio off, it hardly seems likely that the Sex Pistols singing Anarchy in the UK, or The Stranglers singing No More Heroes, would have become tied to memories of happy Sunday lunches with roast potatoes and Yorkshire pudding.

Music has long been used to evoke particular sentiments, military bands spring to mind as a use of music for a very clear purpose. Perhaps the free market and the splintering of people’s preferences now means there are no tunes that could have the impact of Dionne Warwick, no tunes that would hold the attention of the sixteen million listeners to Two-Way Family Favourites.

If there are no longer tunes to be successors to “Do you know the way to San Jose?”, it is a pity. What would my aunt now play, were she twenty-five?