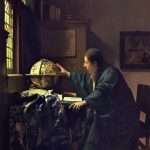 It is five years now since our family last holidayed together. Now the old pair phone home to report all is well, while the younger people get on with their lives in Ireland.

On our last family holiday, my daughter and I had a stupid argument in the Louvre.

“I don’t like anything before the 17th Century Dutch paintings”.

“So you write off the whole Renaissance just like that?”

“I didn’t mean that; I meant the first stuff I like is the Dutch stuff”.

“I didn’t say there was anything wrong with it, I just said I liked Vermeer and the other Dutch painters”.

“OK, maybe it is, but capitalism in 17th Century Holland meant for the first time artists weren’t controlled by the church”.

“That doesn’t mean the Renaissance is not good”.

“I didn’t say it wasn’t, just that I prefer other stuff”.

It was a lesson not to argue with a daughter who loves Venice, Florence and Rome.

Vermeer seems to usher in the modern world. Lives of comfort are possible for people other than the aristocracy and the church. Books and literacy allowed the development of individual conscience and opinion. Merchant wealth allowed the first shoots of a democratic society. Maybe the life of the ordinary person was not much different in sternly Protestant Holland from what it was for the common folk of Catholic countries, but there was the possibility of thinking for oneself. The invention of the telescope by Dutch merchants was a boon to commodity traders wishing to know what ships were to arrive in port; the development of the telescope by Galileo caused his prosecution by the Roman hierarchy who could not contemplate a vision of the universe at variance with their own.

Perhaps the difference in the paintings owes more to the patron than the painter. The art favoured by the church mostly presents a passive, suffering Christ, an ideal model for a society one wishes to remain cowed and obedient. Mary is presented as passive or as mourning mother in depiction after depiction. There seem not many studies of the cleansing of the Temple or the Sermon on the Mount; nor of the society envisaged by Mary in the words of the Magnificat. The 17th Century Dutch painters reflect the prosperity and social standing of those paying for the work. Street scenes are idealised and interiors are perfect; the subtle message is that sharing these values allows one to aspire to a similar lifestyle.

It is not the Renaissance paintings that are troublesome, it is the society from which they come. Perhaps the Dutch works should also disturb, but, being an incurable Protestant, the prospect of individual conscience seems more attractive than the prospect of church authority.