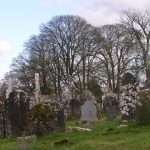 A walk around a cemetery can prompt many thoughts, not all of them necessarily pious. Sometimes the old Irish music hall song, “Isn’t it grand, boys?” can seem more appropriate than the strains of the music from a solemn requiem. Certainly, it seemed so in the case of a funeral a long time ago in a galaxy far away.

The undertakers had done a very good job; a slight black mark on the right temple was the only sign of what had occurred.

“His girlfriend says she’s keeping his car. She has it at the house where they were living”.

“Well, I said to her that there was no way that she was having that car. That I was his rightful next of kin and that it was mine”.

There was the temptation to point out that people who put a handgun to their right temple and pull the trigger don’t generally have a chance to cry out for anyone.

The girlfriend was as bad.

“This was an accident; don’t be listening to what they’re saying. He was cleaning that gun and it went off. He and I were getting married, that’s why his ma didn’t like me”.

The funeral was bleak: prayers in the front room of the mother’s house, with the coffin lying open, followed by burial in a cemetery swept by a biting wind.

The two groups of mourners stood either side of the grave like opposing rugby packs; the mother and family members to the right and the girlfriend and her companions to the left. They glared at each other like a pair of heavyweight boxers squaring up for a fight.

At the end of the burial prayers, the girlfriend went to throw a bunch of red roses into the grave. The wind was so strong that they were carried aside and ended strewn over the pile of muddy soil that would soon cover the coffin.

The argument picked up where it had left off. The baffling thing was that neither of them could drive, maybe the car was the only thing of cash value.

Even almost three decades later, it still seems astonishing that people might carry their arguments to a graveside. The car seemed the focal point of a deep-rooted animosity which would leave no winner. Exchanging insults would not bring back to life the son of the one and the boyfriend of the other.

In schooldays the teacher would say that no-one ever won an argument. It always seemed an odd thing to teach to people. “Of course people win arguments”, we would think. As the years passed it became clear that the teacher was right, that an opponent might be battered, but that would only cause them to slink away and wait for the moment of revenge.

Saint Paul’s advice about not letting the sun go down on one’s wrath always seemed trite; why should I be reconciled the other person was in the wrong? But no matter how much things are the other person’s fault, memories of that pale young man lying in his coffin come back sometimes as a warning of where arguments can unwittingly lead.