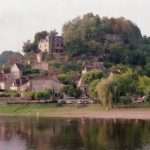 Being in the area, there was a moment of curiosity as to what the church was doing. “Messy church” announced its website; the sort of stuff that has, for decades, been the staple of children’s and youth clubs re-branded to suggest that church is something “hip and cool and with it”, or whatever the current phrase is. Reading it, the heart sank, what is wrong with simply declaring that your church is about the worship of the most high God? Won’t people take you as seriously as you take yourself?

It is more than twenty years since we attended the church. It is in a beautiful village, every turning brings another picture postcard scene. The village church is an imposing place, a sign of the village’s great wealth in the middle ages. Built in the local stone and in excellent repair, it is witness to a continuing presence of Christian faith in the village.

The Catholic priest has a number of churches in his care, so that the Mass is later in the morning, leaving an opportunity for a service in the first half of the morning. The Anglican service we attended was advertised as open to all English-speakers. When we arrived, we discovered that by “English-speakers” those leading the worship meant members of the Church of England.

The Church of England Alternative Service Book was thrust into our hands with little explanation as to what it was for or how to use it. The priest launched into the Church of England Communion service, and it was quite clear that the worship was intended for the English expatriate community.

Michael was a toddler at the time and we were handed a colouring sheet and crayons and directed to a seat about half way up the church. Michael became curious after a while and made a couple of efforts at going to explore this interesting building. This attracted glares from those sitting nearby.

The final straw came during the prayers. First, we were treated to a lady’s poem about the buzzing of bees, then came the prayers for rulers and those in authority, “We pray for Elizabeth our Queen and for Francois, President of France.” That was it, I wasn’t staying any longer, this wasn’t a church for English-speakers, it was a colony of English people who happened to be in France. The arrival of “messy church” is a sure sign that, twenty odd years later, this is still a church for the English.

The service had been a wonderful opportunity to tell people about Jesus, to speak of the most high God, instead all I got was a sense of the tastes and preferences of a group of ex-pats. Michael and I went and explored the village. I have avoided expatriate gatherings ever since.