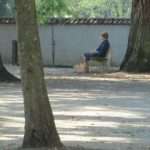 Time is strange. Turning the pages of a diary or turning over the sheets of a calendar, it all seems equal, but when you look back on it, there are definitely chunks of time that lasted much longer than others. It is not just how long it lasts, either, it’s the order it came in. There are sections that were in the distant past that are fresh and clear and other bits much more recent that have become old and faded.

I once heard it suggested that all of time happens all at once and if we could just see around the corner we could see into our future or look back into the past. Psychologists would probably tell me that it’s not time that goes out of shape or gets out of order, but that it’s all about the physiology of my brain and that the files for 1979 are more readily accessible than the files for 1994.

Whatever the explanation, time has a mysterious quality.

I knew a wonderful lady who lived until the age of ninety-seven. “The problem”, she would say, “is that I don’t feel that I am the age I am”.

I think I understood what she was saying. There is a wonderful passage in the opening chapter of Milan Kundera’s Immortality that captures that sense of timelessness that many of us have,

Isn’t it such a sense of timelessness that is promised us in the prophet Isaiah?

“Those who hope in the LORD
will renew their strength.
They will soar on wings like eagles;
they will run and not grow weary,
they will walk and not be faint”. Isaiah 40:31