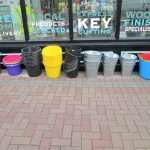 There were two, perhaps three, cameras in the house in the early ’90s: an SLR without a flash, and two smaller cameras, one with a flash and one without. Taking photographs was not the expensive pastime it once had been, but only someone professional would take lots of pictures when one or two would suffice. Go twenty years further back, and pictures are few and far between. Film was expensive, developing and printing was expensive, and it would not have occurred to most people to have simply taken random photographs.

Twenty years hence and people will find alien the idea that every moment of life would not be a subject of pictorial record. Communication now is as much about images as words; mobile phones are about much more than talking, they are about photographs and video. As long as a mobile phone network is available, pictures of everything can be sent everywhere.

Being a compulsive picture taker, carrying a pocket size digital camera to record the images of everyday life, the thought sometimes occurs that there is perhaps an inflationary effect upon visual images, the more images we record, the less value each one has. Newspapers and magazines that might once have illustrated a story with a single picture now fill pages with images, to the extent that the text has become incidental.

Our limitless ability to take and transmit images will maybe mean our ability to communicate is further reduced.

The telephone brought the decline of written communication. To read the letters written by even ordinary people a hundred years ago brings an awareness of how literate many people were. Once universal education had become available in the late 19th Century, writing was taken seriously. To read letters sent home by emigrants brings a sense of something being lost. How many famous people are remembered through the collection of letters they wrote to others? How many insights into history and its nuances are conveyed in the correspondence of those who were the principal actors in the events? Clergy, particularly, were known for engaging in the writing of lengthy and, often, learned, letters; a habit which has long since disappeared. Who writes letters now? Why would one write when a telephone call costs little or nothing?

But will the advent of constant images bring the decline of verbal communication? Will we become so accustomed to receiving constant pictures and videos that the idea of talking to someone, articulating thoughts and concepts, will become as quaintly outmoded as picking up a pen and paper to write something that will be put into an envelope and posted, only reaching its intended recipient days later?