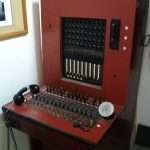 The bookcase was a fine item of retro technology, a piece worthy of MFI in the late 1970s, a hammer and Philips screwdriver were employed in its assembly. Its presence meant the sorting of accumulated books and pamphlets that had gathered in flat spaces. “That can go out”, muttered the Best Beloved, throwing a green-covered pamphlet across the room.

“Pastoral Care in the Digital World“, a report from the Church of Ireland’s Social Justice and Theology Group, was published in 2009, it had survived a house move from Dublin because I had contributed an individual perspective on the Internet:

“Like the printing press, the Internet provides an opportunity for publishing the best as well as the worst of material. It is undeniable that the opportunities for the dissemination of undesirable material have become limitless, yet to judge the Internet on such a basis would be like judging the publication of books and magazines on the basis that some have used the print medium for the worst of purposes. The Net, as it has become known, is a tool of communication; what it communicates is determined by its users.

Approaching the use of the Net from a Christian perspective, there are innumerable opportunities for sharing the faith, finding resources for church life and even for pastoral care. The Church of Ireland realized at an early stage that the Net offered significant opportunities to resource parishes and clergy with news and liturgical material. The facility to access weekly readings and all the liturgical material from the Book of Common Prayer has proved a boon for many clergy. There has also been the opportunity to tap into the liturgical and spiritual riches of many and diverse other traditions from around the world.

Perhaps one of the less explored dimensions of the Net is its use as a tool of Christian pastoral ministry. Such ministry may be intentional and formal, such as the many websites that provide material and contacts for those seeking help in a particular situation or crisis.

However, recent years have seen the proliferation of “bloggers”, writers of “weblogs” or journals on the Internet. The readership of even the most modest of these often runs into hundreds every month and, in some cases, may run into many thousands. The opportunity to communicate with numbers significantly larger than the typical Church of Ireland parish is one that should be approached with caution and responsibility. Difficult issues may be explored in a non-threatening and interactive way, many blogs have the facility to post comments, or to communicate directly with the blogger. The opportunity of anonymity is sometimes important to people who may be endeavouring to work through painful memories from the past.

The Internet is both anarchic and egalitarian and does bring with it dangers as well as opportunities. Church responses to the Net have often been to acknowledge that there are opportunities and to focus on advising on website design, which would be like a publisher focusing on the paper and binding of a book without asking questions about its content. Little attention has so far been devoted to what websites and blogs exist; what issues they raise; and what ways the Church as a whole might utilize the opportunities available”.

The piece was written in 2007 and was already dated by 2009. Bloggers had played a major part in the Obama election campaign in 2008 and had emerged as important voices of dissent in oppressive regimes. At a microscopic level, Google Analytics was recording considerably more visitors here than I had people in my parish.

Five years on and the Church has still not engaged, in any concerted way, with the digital world, even church websites have a 1990s feel and the challenge of social media has been met with no systematic response whatsoever. Without comprehending the digital world, talk of pastoral care is redundant.

That can go out.