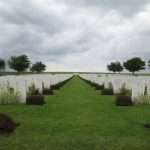 “Keep awake therefore, for you know neither the day nor the hour.” Matthew 25:13

In the year in which we have marked the centenary of the beginning of the Great War, the Gospel reading for today provides us with thoughts with which to reflect upon the events of 1914 as well as warnings against complacency and unpreparedness in our own time.

“Ten bridesmaids took their lamps and went to meet the bridegroom”, says Jesus in Saint Matthew Chapter 25 Verse 1; it is a time of expectation of better things, a time of anticipation of celebrations. In 1914, while many people, in both city and countryside, still lived lives of grinding poverty, there was an expectation on the part of everyone that there were better times to come. Supported by Winston Churchill, David Lloyd George, the Chancellor of the Exchequer, had introduced his “People’s Budget” in 1909. Lloyd Gorge declared, “This is a war Budget. It is for raising money to wage implacable warfare against poverty and squalidness”. Certainly, while millions of people would not have shared the idea that the Edwardian era, that first decade of the Twentieth Century, was somehow a “Golden Age”, there was a hope of better lives. Like the bridesmaids waiting for the feast, there was a mood of optimism among most people.

How many people could have anticipated what might lie ahead? Half of those in Jesus’ parable had the gift of foresight, verses 2-4 tell us, “Five of them were foolish, and five were wise. When the foolish took their lamps, they took no oil with them; but the wise took flasks of oil with their lamps”. What proportion of the people of Europe could have guessed in 1914 what preparations might have been necessary for the coming years? Perhaps a few writers on military matters had an inkling of what war might really mean, but there is no hint that the rulers of the countries concerned had any clue of what lay ahead. The empires of Germany, Austria-Hungary, Russia and the Ottomans would be brought down by the conflict, would any of them have consciously sought their own destruction? Five are foolish and five are wise in the parable, were there any people who might have been counted as “wise” in 1914?

The parable continues in Verse 5, “As the bridegroom was delayed, all of them became drowsy and slept”. The bridesmaids doze and drift into the situation that would confront them and there is a sense of drift in the events of the summer of 1914. One can read accounts of the meetings between the foreign secretary, Sir Edward Grey, and the French ambassador in London (who hated the place so much that he took the train home to Paris each weekend), and smile at stories that Grey did not speak French and the ambassador did not speak English and that there was no interpreter present; the thought that Herbert Asquith, the prime minister, wrote letters to his girlfriend while chairing cabinet meetings might seem amusing; but it would be black humour, there seems no comprehension of what horrors might await. War might not have been inevitable, at any point the Germans might have reviewed their plans to attack France by sweeping though Belgium, at any point the British may have decided that a Continental war would demand too much of them, but the drift seems inexorable.

August 1914 arrives, like verse 6 in the parable, it is both expected and a surprise. “At midnight there was a shout, ‘Look! Here is the bridegroom! Come out to meet him,” Jesus tells his listeners. The parable is a description of the Kingdom, it is a warning of the coming Day of Judgement. For millions of young men, the battles of the ensuing four years would be their own last days, but in 1914 there was no sense of such an impending doom. With jolly cries of being “home by Christmas”, they went off to meet the horror.

Jesus continues in verses 7-8, “Then all those bridesmaids got up and trimmed their lamps. The foolish said to the wise, ‘Give us some of your oil, for our lamps are going out.” The wise in the parable are prepared, the situation is not a challenge, how many could have been counted as “wise” in 1914? Certainly not politicians who seemed to have no appreciation of what war would cost in human and economic terms and military men who believed strategies and tactics from the past would suffice for the future. In 1914, foolishness encompassed all sides.

“And the door was shut”, says verse 10 of the parable. It has an air of terrible finality, such is Jesus’ intention for he is speaking of the Last Day. To those lying amidst the hellish scenes of the Western Front or Gallipoli or burning merchant ships, it must have seemed like the Last Day., it must have seemed that the door was shut in Europe, that all light and peace were gone.

The foolish bridesmaids in the parable come to the house and appeal to the bridegroom and he responds in verse 12, “Truly I tell you, I do not know you”, God turns his face away from those shut out. Walk the Western Front and there is a sense of God having turned his face away, for how could a good God watch such slaughter? The Anglican Chaplain Geoffrey Studdert Kennedy captures a sense of that utter desolation in his account of being at Messines Ridge on 7th June 1917,

As I ran I stumbled and fell over something. I stopped to see what it was. It was an undersized, underfed German boy, with a wound in his stomach and a hole in his head. I remember muttering, “You poor little devil, what had you got to do with it? Not much great blonde Prussian about you”. Then there came light. It may have been pure imagination, but that does not mean that it was not also reality, for what is called imagination is often the road to reality. It seemed to me that the boy disappeared and in his place there lay the Christ upon his cross, and cried, “Inasmuch as ye have done it unto the least of these my little ones ye have done it unto me.” From that moment on I never saw a battlefield as anything but a crucifix. From that moment on I have never seen the world as anything but a crucifix.

“Woodbine Willie,” as Studdert Kennedy was called, sees Jesus suffering with his people; a reading of the account of the crucifixion shows it as a moment when darkness fell, a moment when Jesus cries out that he has been forsaken, a moment when God has turned his face away.

“Keep awake therefore, for you know neither the day nor the hour”, warns Jesus as he concludes the parable. Foresight and wisdom are demanded; a warning as appropriate to 2014 as to 1914.