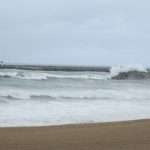 It is twenty-five years since the fall of the Berlin Wall.

Our summer holiday that year had been taken on the south-west coast of France; a land of vast beaches stretching northwards and southwards to the horizon; a land of spectacular sunsets as yellow and orange and pink and red and purple fill the sky over the Bay of Biscay; a land also where the sea has terrifying force. The huge rolling waves pound the sands, and the tides sweep the beaches with immense power. The tides, which sweep clean the beaches, have huge destructive potential and massive dunes are maintained to hold back the sea.

Signs of the first crumbling of the Communist regimes that had imprisoned one-half of Europe were appearing while we holidayed on those Landaise beaches in 1989. Sitting in the August sun, reading Milan Kundera’s The Unbearable Lightness of Being, a novel set against the background of the Prague Spring of 1968, there was a hope that this time things would really change. The experiences of Tiananmen Square would not be repeated in Europe; Mikhail Gorbachev, the Soviet leader, was a world apart from the Chinese Communist Party.

Reading histories of the fall of the Berlin Wall and of the decades of oppression that had led to 9th November, 1989, it is a source of amazement that the regimes had endured for so long. The repressive measures needed to maintain the East German regime were carefully documented by the Communists themselves; if this was what was necessary to sustain the governments of those states, did they even believe themselves that their ideology would triumph?

Markets are innate to human nature; a willingness to barter, to buy and to sell are components of civilisation from ancient times; even within Communist societies it was not possible to suppress such activity; black markets flourished. Markets can bring freedom, what is also clear is that markets can bring profiteering, exploitation and gross injustices and that working people can find themselves the victims of impersonal economic forces that take no account of the welfare of ordinary people.

Twenty-five years after the beginning of the end of European Communism, traditional free market capitalism looks creaky. The destruction of the Left brought a vacuum in politics, those feeling alienated by conventional politics which has offered years of recession and erosion of working class living standards, look for radical and simple answers. The radical Right offers them scapegoats for their problems, chiefly immigrants and the European Union, and suggests nationalism and isolation are the ways forward. The European elections in the summer might only be a foretaste of election results to come.

Twenty-five years after the fall of the Wall, the political waves are threatening and one wonders what dunes there are to hold back the rising tide.