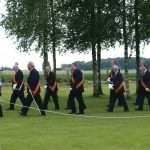 Remembrance Sunday and memories of such days in the North, particularly the last Remembrance Sunday spent there. The commemoration had an intensity, an indefinable quality, that lingers in the memory. The words were to be repeated and repeated.

Eleven o’clock at the War Memorial.

Half past eleven at church.

Three o’clock in the village, with those who had stood in the parade at eleven.

There was something almost hypnotic in the ceremony; the bugle tones cutting through the November chill as if the sounding of reveille would somehow change the script.

The ranks of dark-coated men watched as a boy lay a wreath in memory of his father, shot dead on duty.

There were moments when I think I almost understood, but my English conscience would then blur my thoughts; those assembled saw the world differently. Had I been schooled in Calvinism, had I some appreciation of the concept of Election, had I understood those Old Testament stories, I might not have made so many mistakes.

Frank McGuinness, a Donegal Catholic, understood. His drama “Observe the Sons of Ulster Marching Towards the Somme” captured the intensity, both of 1916, and of more recent times.

(They each begin to put on their Orange sashes. CRAIG watches PYPER, then takes his sash off, goes to MOORE, hands. it to him. MOORE hesitates, then exchanges his sash for CRAIG’s. At this there is an exchange of sashes, CRAWFORD’s for ANDERSON’S, MILLEN’S for MCILWAINE’S. ROULSTON goes to PYPER, who takes ROULSTON’S and gives him his own.)

PYPER: It’s come to this, Roulston?

PYPER: There’s no fight back?

ROULSTON: And outside us.

ROULSTON: No. You preach. (Silence. They wait.)

It is sixteen years since I saw those November faces. Meeting them now on July days at the Somme, the old sense of confusion returns.