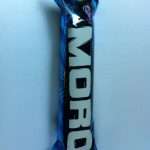 The Christmas television advertising campaign is under way: is it worth the advertisers’ expense? Would we not go out and spend our money anyway?

Advertisements from the 1960s and 70s remain clear in the memory, most of which created no desire to rush out and spend money on what they were trying to sell. The chocolate advertisements were always amongst the silliest.

Remember the scantily clad twenty-somethings stepping ashore on the tropical island? “They came in search of paradise and found it in Bounty”. Rubbish. Bounty must have had the most exaggerated qualities of any bar of chocolate.

Mars was much more prosaic. “A Mars a day helps you work, rest and play”. Never knew what that meant. How did a Mars help you play?

Cadbury’s Fruit and Nut was just off the wall. “Everyone’s a fruit and nutcase!” How was that song going to persuade people to buy chocolate?

“All because the lady loves Milk Tray”, with its James Bond-like adventures became the subject of numerous parodies, while “Who knows the secret of the Black Magic box?” seemed pointless. Of course we knew the secret; it was to fill the box up with plain chocolates which kids did not like leaving the entire contents of the box for adult consumption.

Perhaps remembering the advertisements is a sign their makers succeeded; perhaps the best they can do is to get a brand name lodged in someone’s brain and hope that, when it comes to making choices, brand recognition will boost sales

Perhaps even the best advertisement copy writer can do nothing about the subversive ways of some children and can operate on the assumption that many other children are much more pliant, though it is hard to imagine that anyone thought Bounty would transport them to the Caribbean.

Yet even amongst the more easily influenced, how many were persuaded by that silly kid in his silly cowboy outfit? Be honest, did anyone really ever buy Milky Bar for themselves, or was the advertisement really directed at parents and their wishes as to how they would like their children to be? Perhaps the Christmas campaign is similarly directed at parents, children being far too worldly-wise to even take time to notice what is on between the programmes they watch.

Moro bars are very nice, but not once have I ever seen them advertised