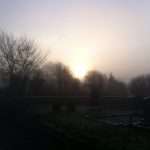 It is odd. Driving the same roads every day, having covered those roads hundreds of times, you would think that every yard (I suppose I should really say “metre”) would by now be familiar, yet there are moments when I look around and seem to be seeing things for the first time. The moments of reverie come with a sense of tranquility, the familiar becomes suddenly transformed into a thing of beauty, Hedgerows, trees, hillsides look different. It is an odd experience, it is that feeling you get when you look at a room in your house and then look at a photo of the room, and they look different.

It is odd how prosaic experiences can make poetry of what lies around. Samuel Beckett would have understood. Lines from his short story The Expelled describe a moment of reverie of a man thrown out of a house:

The fall was therefore not serious. Even as I fell I heard the door slam, which brought me a little comfort, in the midst of my fall. For that meant they were not pursuing me down into the street, with a stick, to beat me in full view of the passers-by. For if that had been their intention they would not have shut the door, but left it open, so that the persons assembled in the vestibule might enjoy my chastisement and be edified. So, for once, they had confined themselves to throwing me out and no more about it. I had time, before coming to rest in the gutter, to conclude this piece of reasoning.

Under these circumstances nothing compelled me to get up immediately. I rested my elbow on the sidewalk, funny the things you remember, settled my ear in the cup of my hand and began to reflect on my situation, notwithstanding its familiarity. But the sound, fainter but unmistakable, of the door slammed again, roused me from my reverie, in which already a whole landscape was taking form, charming with hawthorn and wild roses, most dreamlike, and made me look up in alarm, my hands flat on the sidewalk and my legs braced for flight. But it was merely my hat sailing towards me through the air, rotating as it came. I caught it and put it on. They were most correct, according to their god. They could have kept this hat, but it was not theirs, it was mine, so they gave it back to me. But the spell was broken.

For Beckett’s character, it is a hat that breaks the spell. On the roads of Laois and Kilkenny it is a milk tanker on the road ahead.