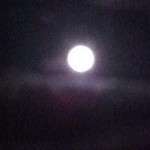 A clear sky and a Sunday evening with nothing in the diary meant the opportunity to take the telescope out into the garden and stare into the vastness of space – Cassiopeia, Ursa Minor, Ursa Major – the tour of the constellations was brought to a halt not by cloud, but by fog rising from the river and blanketing the town.

There is something deeply calming about contemplating space and something reassuring about places from which deep space is observed. Visiting the Penticton observatory in British Columbia in 2008, it seemed hard to imagine a more ideal job than to be working there. To spend one’s day considering infinity, instead of coping with the petty annoyances and trivial frustrations of most other jobs, seemed a prospect that anyone would welcome. The sheer vastness of land and sky could not fail to influence even the most insensitive of people. The stupid disagreements and divisions that characterize so much of ordinary human society seem ridiculously absurd in such a context.

Perhaps there is an attitude that is shaped by the location of the observatory, and the others like it; it’s set in what a friend used to call “big sky country”. My friend believed geography was a determining factor in people’s thinking, that the open countryside that allowed easy transport and communication meant people had a different sense of perspective, that they were subject to more and different influences, that, subject to numerous cross pressures, they were flexible in attitudes, open to change, tolerant of diversity.

Perhaps it’s not so much the big skies, as the accessibility of places that really makes a difference. Big skies might attract astronomers and the scientific community, but viewing those skies from remote, isolated places might mean neighbours who were very different from my friend’s liberal ideal. Astronomers and scientists might have a big perspective; their neighbours in town might have very different attitudes. Big skies might be seen from the flatness of 17th Century Holland; they might also be seen from the vast steppes of feudal Russia. Openness without accessibility means the cross pressures, the exchange of ideas, the growth of liberal society, are inhibited.

It is not physical big skies that are needed, but psychological ones; a willingness to look up from present situations and to place them in a massively greater context; to acknowledge that one’s knowledge is painfully incomplete and that there remains much that is unknowable. Stare into the night sky and certainties are not so certain.