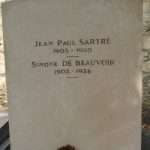 It was five years ago, on the Feast of Saint Nicholas, that I attended a feast day party for Nicholas, a French friend. It was one of those moments that still lingers in the memory, one of those rare moments that will remain as long as my days, an occasion of sublime happiness. Laughter filled Nicholas’ house that day; it was always a place of smiles, a place where conversation was lively and challenging.

The house was stocked with a plentiful supply of books, eclectic, and as befitted the whole family, bilingual. I borrowed one in English. Pooh and the Philosophers by John Tyerman Williams is a brilliant work for anyone who appreciates the subtlety of A.A. Milne’s work. Here is how Tyerman Williams introduces the thought of Nicholas’ fellow Frenchman Jean-Paul Sartre:

Sartre’s fame was due partly to his political activity; partly to his success as a novelist and dramatist. He was, in fact, a far better novelist and dramatist than he was a philosopher. Indeed, the most impressive passages in his major philosophical work, Being and Nothingness, are vividly dramatic portrayals of specific events, which might well have appeared in one of his novels or plays.

Being and Nothingness is the title of Sartre’s major philosophical work. As it first appeared in 1943 (682 pages of text in the original French; 626 larger pages in Hazel Barnes’s English translation), we must consider it the longest single footnote to Winnie-the-Pooh ever written.

Can we doubt that Sartre’s key concept of Nothing­ness was derived from Chapter Three of The House at Pooh Corner? The text which reads, ‘Pooh … stepped on a piece of the Forest which had been left out by mistake,’ clearly led Sartre to comment, ’emptiness is emptiness of something’: Pooh experiences the empti­ness by falling into the pit caused by the emptiness where there should have been a piece of the Forest. Pooh’s judgment that he has fallen comes after and as a result of the absence of a piece of the Forest, and so enacts Sartre’s more abstract statement that ‘the nega­tive judgment (there was not a piece of the forest there) … is conditioned and supported by non-being.’

When Christopher Robin asks Piglet what the Heffa­lump looked like, Piglet answered, ‘-like an enormous big nothing’. When Eeyore tells Christopher Robin his house has disappeared, the two of them go off together and soon come to the place ‘where Eeyore’s house wasn’t . . . ‘

After these brief passing references to the problem of nothingness, we find Pooh Bear meeting it head on.

On the first page of The House at Pooh Corner, Pooh goes ’round to Piglet’s house to see what Piglet was doing’. On arrival, he finds he cannot do this, because ‘the more he looked inside the more Piglet wasn’t there’.

This will remind all who have read even the first few pages of Being and Nothingness of Sartre’s anecdote of going to a cafe to keep an appointment with Pierre and discovering Pierre is not there. As he puts it, ‘Pierre absent haunts this cafe … ‘ Not a bad equivalent for Milne’s ‘the more he looked inside the more Piglet wasn’t there’, though lacking the vivid concreteness of the great original.

This, of course, is typical of scholarly footnotes. So is the length of Sartre’s footnote: it covers just over a page and a half; Milne says it all in a short paragraph.

There are not many houses in which one would find such a book. Perhaps it is a mark of brilliance that you don’t realize it is present until you have gone; you aren’t aware of the moment until it has passed. Bonne fête, Nicholas.