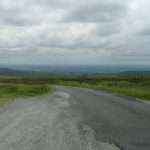 “There’s four who share this room and we work hard for the craic
and sleeping late on Sundays I never get to Mass”.

The singer stood alone at the microphone, expressionless as he sang Ralph McTell’s “From Clare to Here”. What expression would have been appropriate? For many of those gathered in the hall the song represented reality. Before the music had begun, a farmer sat across the table had talked of how all of his friends from schooldays in the late Forties and early Fifties had left to find work in England, few had ever returned.

There had been place settings for one hundred and twenty-eight people at the seniors’ dinner, every one had been occupied; the collective recollections of the gathering would have filled many volumes, recollections that would have been an indictment of the state, of the churches, and of the employers who regarded the Irish as a pool of cheap labour, to be discarded when no longer needed.

A man not in the hall might have given Ralph McTell abundant material for extra verses to the song. He avoids gatherings, preferring a chair beside the range in his farmhouse. In his mid-80s, he will tell stories of the sixteen years he spent in England in the 1950s and 1960s, the small family farm offering no prospect of an income to both he and other family members. He worked in the motorways, on roads and in chemical factories; the work was always hard and heavy and there were more than a few who spent the entire week’s wages on a Friday and Saturday night and had to borrow the money needed to get through the week.

The attraction of much of the work was the opportunity to be paid cash in hand; they would put down fictional names and the employer would be happy to collude with the tax evasion. Having no official status, they could be paid minimal wages, have no national insurance contributions towards a pension, and be told they were dismissed at the whim of the foreman who had given them the work. The poor always lose out.

He would have gone to a Church of England parish church on the odd occasion, “they never spoke to me”. It was probably assumed that an Irish “navvy” was someone who was automatically a Roman Catholic. (A Dublin friend in recent times tells of going into an Anglican church in Cardiff wearing an Irish Rugby Football Union blazer and it being suggested to him that he might be in the wrong place). A man who thinks he probably drank two gallons of beer in the course of sixteen years, he hadn’t even the camaraderie of the bar on a Friday night. “From Clare to here”, would evoke for him only days of tiredness and loneliness and a longing to be back on the farm overlooking the Slieve Blooms.

“I sometimes hear a fiddle play or maybe it’s a notion
I dream I see white horses dance on that other ocean”.

It is good to acknowledge what has been there, and good to move on to the present.