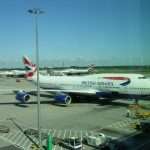 A power cut this afternoon in the British air traffic control centre at Swanwick in Hampshire caused substantial disruption of flight times and schedules. There were stories of passengers sitting inside aircraft on the tarmac for three hours with the cabin doors open, and of flights circling and circling, and of others being diverted to other airports. It is hard to imagine air travel at it once was, when pilots could make choices, exercise discretion, and were not operatives in a computer-controlled network.

There used to be a book at home called En Route, it was an out of date edition brought by my father from the air station at which he worked. It was a handbook of airports and aerodromes and airfields and airstrips; a comprehensive directory of all the places where it might be possible to land an aircraft. It had details of the lengths and directions of runways, of the landing surfaces, of what lights there were, of what radio facilities there were. When you are an awkward teenager with limited social skills, the book was a treasure trove. It was possible to imagine being a pilot in some part of the country having to make an emergency landing and taking out his faithful copy of En Route to decide where best to attempt to put the plane down. I would leaf through its pages, searching for those old wartime stations where on the the wind one could almost discern the sound of returning Lancasters, or for those remote locations where Cold War “V” bombers waited silently for the orders to scramble.

The book is probably no longer published; most of the places are probably now under the tarmac of new roads or the gardens of new houses. A friend in Dublin used to have a twin engined plane, losing an engine over the Irish Midlands one day, he asked permission from air traffic control to make an emergency landing. Diverted from the commercial airports, he was instructed to land at the airstrip of a flying club. He did so – just. The runway was too short and as he overran, his undercarriage collapsed and his propellers were mangled in the grass. When he told the story, there was a temptation to say, “There used to be a book . . .”, but what use was something in another country, forty years ago?

It’s all on computer now, maybe as you fly along you get updated details of where you can land nearby. It would be nice to think so – nice to think the captain doesn’t have to say, “does anyone know where I put the book? We’re in a spot of bother”.

Of course, when the computer fails . . .